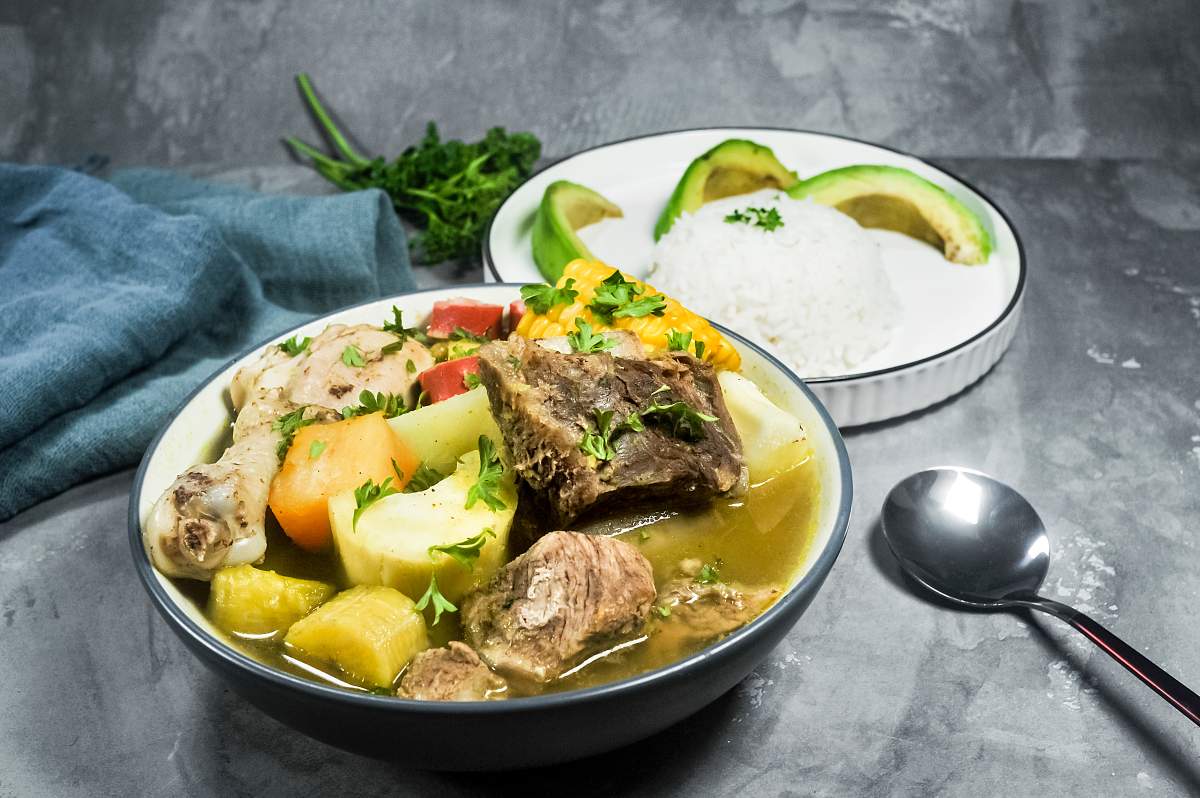 Jump to Recipe Pin Recipe
Author:Keesha
Sancocho Dominicano is a hearty and delicious meat and vegetable stew. This version features chicken, lamb, beef, and pork along with sweet potatoes, pumpkin, and plantain. 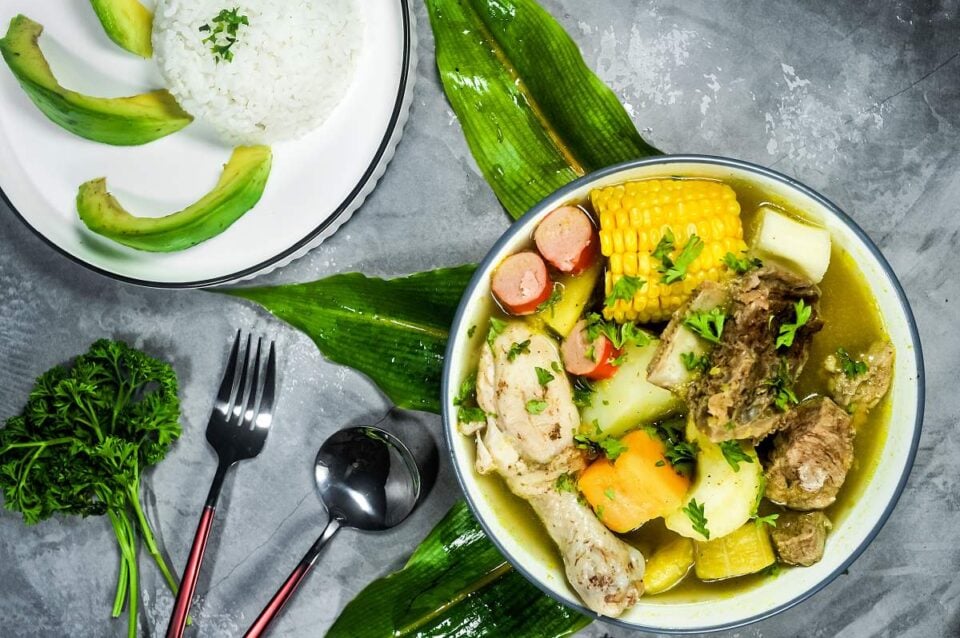 Today I am taking you on a trip to the Dominican Republic through a delicious dish called Sancocho Dominicano. If you know anything about Sancocho, then you know there are many different types. However, today, this rich, hearty stew gets a Dominican twist.

Sancocho Dominicano is the creme de la creme of Dominican dishes. Just ask any Dominican, and they will tell you that Sancocho is THE dish of the Dominican Republic.

Is believed that Sancocho has its origins in the Canary Islands. It’s common in many Latin American countries, such as the Dominican Republic, Peru, and Colombia amongst others.

The traditional Dominican Sancocho consists of 7 types of meat. Therefore, Sancocho is eaten on special occasions.

As you can imagine, most people argue over what the original 7 types of meat for Sancocho were. However, you can use any type of meat you prefer. I used a combination of beef and pork ribs, lamb, and chicken.

Sancocho is relatively easy to prepare. However, I have a few useful tips that will ensure you end up with the most flavorful Sancocho.

Sancocho is traditionally made in a Caldero. A Caldero is a large cooking pot designed for cooking over an open fire. However, if you don’t have a Caldero on hand, which many of us won’t, you can cook the Sancocho in any large pot.

You can use any type of meat when making Sancocho, however, stay away from meats that are rich in fat. As the dish will cook, the fat will render and rise to the surface. You will have to skim the fat before serving otherwise the taste will change. So, save yourself the trouble and use meats that are low in fat.

While you do not have to use 4 types of meat as I did, Sancocho will have a better flavor when it has at least 2 types of meat. Some vegetables cook faster than others. So, add the vegetables with the shortest cooking times last to prevent them from overcooking and dissolving into the soup.

This stew makes a large portion and you can even stretch it further by adding beef or chicken broth. You can also add more chicken if protein starts running out as chicken cooks faster.

Although Sanocho Dominicano has a long list of ingredients that need prepping, it is all worth the hard work. Nothing compares to the flavor of this delicious and hearty Sancocho, I promise you that!

Chicken Legs: Chicken legs take longer to cook, so they will not dry out in the soup. If you do not like chicken legs, you can use chicken thighs. However, do not use chicken breast. The chicken breast does not have enough fat and will dry out while the Sancocho cooks.

Beef Ribs: Beef ribs have a characteristic flavor that really stands out. It gives the Sancocho an umami flavor.

Pork Ribs: Pork ribs have a meaty flavor and rich texture that takes the Sancocho to a new level.

Lamb: Lamb has a gamey flavor and a firm yet tender texture.

Garlic: Garlic adds a warm, earthy flavor to the Sancocho.

Salt: Salt is used to flavor the meat and makes the Sancocho taste delicious.

Olive Oil: I used olive oil but you can also use avocado oil or vegetable oil to sear the meat.

Water: Since Sancocho has a lot of flavor, I opted to use water as the cooking liquid. However, you can use beef broth or chicken broth.

Cassava: Cassava or Yucca adds a mild but nutty flavor to the Sancocho and helps thicken the broth.

Green plantain: I added sliced and shredded green plantain to the soup. The plantain thickens up the broth and absorbs the other flavors of the Sancocho.

Pumpkin: Pumpkin has a sweet, nutty flavor and pairs perfectly with the other flavors in the Sancocho.

Sausages: Chorizo is ideal for Sancocho. However, any sausage will work, including Italian sausage.

Corn: Corn adds a burst of sweetness to the soup. Make sure you use corn on the cob instead of loose corn.∂

Cumin: Cumin adds a depth of rich, earthy, and warm flavor to the Sancocho.

How to make the perfect Sancocho Dominicano?

Marinate the protein in a mixture of lemon juice, garlic, and salt for an hour. Sear the meat and add water to bring it to a boil. Start adding the vegetables with the longest cook times going in first. Cook between each addition and keep stirring to prevent the Sancocho from sticking to the bottom. There you go, you can remove it from the heat and serve it immediately.

You can store leftovers in the fridge and reheat them in the microwave, or on the stove to enjoy a hearty meal the next day as well. It takes 3-5 minutes for it to reheat.

What is the difference between Sancocho Dominicano and Sancocho Colombiano?

The main difference between these two dishes is the fact that the Dominican version has 7 types of meat in it traditionally while the Colombian version does not. The base of vegetables and meat is the same but Sancocho Dominicano is more meat-heavy.

Is Sancocho a soup?

It is somewhere in the middle of a soup and a stew. I consider it a stew since the vegetables and meat cook in a broth for a long period of time until they are tender and the soup is thick. However, traditionally it is a soup or a broth.

Where did Sancocho orignate from?

The Sancocho is believed to have originated from the Canary Islands. Islanders who moved to Latin America brought this dish with them and as the recipe started traveling around, variations started coming up. The base is the same but the vegetables and meats that go in change according to each different region.

What does Sancocho mean?

Sancocho comes from the Spanish word Sancochar which means to parboil. Sancocho is traditionally the name of the dish which contains broth, meat, and vegetables.

What is the best pot to make Sancocho?

Traditionally, Sancocho is made in a Caldero which is a cooking pot designed to cook over an open fire. Nowadays, however, any big pot with good induction can cook Sancocho.

What side dishes can I serve Sancocho with?

In the Dominican Republic, Sancocho comes with a side of white rice and sliced avocado. There is also a spicy sauce to add more heat to the dish. You can also serve it with rice, bread, salad, or sour cream.

Can I make a vegetarian Sancocho?

Yes, you can! While the dish won’t taste the same, you can always use meat substitutes such as jackfruit to make it vegetarian. 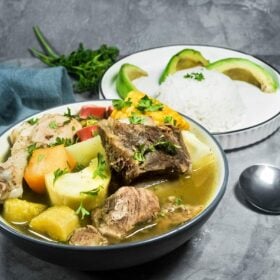 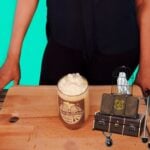 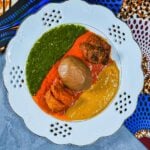