What’s not to love about a bowl of homemade soup, and this Sopa de Estrellas recipe fits the bill. This comforting bowl of delicious soup is an easy recipe to make, and it pairs perfectly with sandwiches.

What Is Sopa De Estrellas?

Sopa de Estrellas is such a simple recipe that it only consists of 8 ingredients.

Tomato: The tomato adds an acidic yet sweet bite to the soup. If you cannot find fresh tomatoes, use 1 14 oz. can of tomato sauce along with 8 cups of chicken or vegetable broth.

Shallots: Shallots add a delicate, sweet, yet slightly sharp flavor to the broth.

Cumin: Although it seems strange, cumin adds a warm, nutty flavor to the Sopa de Estrellas.

Chicken Broth: You can use either chicken or vegetable broth. However, using chicken broth adds more depth of flavor to the soup.

Tomato Sauce: Tomato sauce builds upon the flavor of the fresh tomatoes.

Stars Pasta: The star-shaped pasta is obviously the star of the soup.

How to Make Sopa de Estrellas

First heat olive oil in a soup pot over medium-high heat. Then add the star-shaped pasta and shallots. Cook for 3-4 minutes while constantly stirring until golden brown.

Next, add the garlic and cumin. Cook for 1 minute until fragrant. Afterward, stir in diced tomatoes, tomato sauce, and chicken broth.

Bring the soup to a boil then decrease to medium-low and cook for 8-12 minutes until pasta is al dente.

If the soup becomes too thick, add 2-3 cups of water to thin it out. Serve and enjoy!

When making Sopa de Estrellas, you must toast the pasta first. While you are toasting the pasta, stir it constantly. Do not walk away from the stove. It only takes a second for your pasta to burn. The goal is to wait for the pasta to turn a golden color before moving on to the next step.

Sopa de Estrellas loves to absorb water, so use more water if you want a thicker soup. Once you add the broth to the soup, you will notice it thickens slightly. Less free water will be available as the star-shaped pasta soaks up the water. Free starch molecules will be dispensed from the pasta’s surface and hydrate. These starches will increase the viscosity of the Sopa de Estrellas broth.

To make vegan Sopa de Estrellas, all you have to do is change the broth. Simply substitute chicken broth with vegetable broth. You can use better than bouillon cubes if you do not have vegetable broth. Make sure you dissolve the bouillon cubes in 2 1/2-3 cups of water. The star-shaped pasta is usually vegan. However, read the ingredients to make sure it is vegan.

Can I Freeze Sopa De Estrellas?

How To Make Sopa De Estrellas In An Instant Pot

If you do not have much time on your hands, you can easily make Sopa de Estrellas in an instant pot. Simply blend the tomatoes, garlic, shallots, and a little chicken broth in a blender until smooth. Add the star-shaped pasta into a pot and cook for 3-4 minutes until golden. Add the chicken broth and tomato sauce. Place the lid onto your instant pot, seal it, and pressure cook the Sopa de Estrellas for 2 minutes.

There are multiple ingredients you can use to make this Sopa de Estrellas heartier.

While Sopa de Estrellas is perfectly fine on its own, you can add toppings. For example, you can add chopped cilantro or parsley, sour cream, jalapeno, and crumbled Queso Fresco. 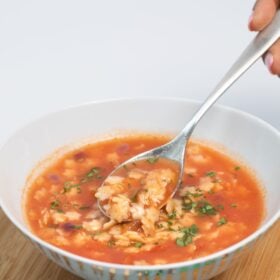 Keesha
This Sopa de Estrellas recipe is simple and easy to make. All you need is tomatoes, shallots, garlic, chicken broth, and of course the pasta. The star-shaped pasta is toasted to intensify its flavor before the rest of the ingredients are added. Do yourself a favor, pull up a seat, and enjoy this bowl of soup with your favorite movie on a cold winter day.
5 from 1 vote
Print Recipe Pin Recipe
Prep Time 10 mins
Cook Time 20 mins
Total Time 30 mins
Course Soup
Cuisine Mexican
Servings 4
Calories 165 kcal