Jugo de Avena is a fantastic oat milk beverage served over ice. It is incredibly refreshing, easy to make, and packed with flavor.

What makes it even more exceptional is its versatility. There is no end to the number of recipes you can find on the internet. That is exactly why I decided to include two of my favorites here today.

What Is Jugo De Avena?

Jugo de Avena shouldn’t be confused with Avena or any other type of Aneva beverage. And trust me, there are many!

This drink is a non-alcoholic chilled oat and dairy drink with added citrus juice. I know, a broad description. But the reason for that is that there are also an endless number of variations for Jugo de Avena.

The name directly translates to oatmeal juice, which is essentially what it is. It is also sometimes referred to as Licuado de Avena, which translates to “oatmeal smoothie.” The term you use mainly depends on how you end up making it and the ingredients you use.

Arguably the most classic recipe is made from blended oats and milk. It is sweetened with sugar and chilled in the fridge. Then, slowly whisk lime juice into the blended and sifted oat mixture before serving it over ice. That is pretty much the first recipe I have provided.

The second recipe is one of my favorite variations my family still makes today. This one is much quicker and doesn’t require any blending. You use oatmeal instead of oats, which is much smoother in texture. Then, the recipe also uses evaporated milk and vanilla. Evaporated milk will add a thicker consistency and richer flavor. The vanilla extract will give the drink a “dessert” flavor.

Now that I have explained my two favorite recipes for this refreshing Dominican beverage, let’s look at other ways you can change things up.

First, you can change the type of dairy ingredient you use. When you use a thicker product, like heavy cream or evaporated milk, the drink will be thicker in consistency.

You can also use a sweetened dairy product like condensed milk. Or, you can go vegan and use oat, coconut, or almond milk.

While most people use lime juice, you can substitute it with lemon juice without changing the flavor too much. Some people also make it with orange juice, but I don’t particularly like it this way.

And finally, you can, of course, alter the sweetness of the recipe. I use granulated white sugar, but you can use whatever sweetener you like the most. And you can change the amount you use too.

How Do You Make Jugo De Avena?

There are two main ways I make this Dominican oat drink. The method mainly depends on the type of oats you use.

If you use rolled oats, you need to blend them to create a smooth and thick drinkable mixture. If you use oatmeal, you don’t have to blend it because it’s already fine enough to drink.

Whichever method you end up using, when you add the lime juice, you need to do so very slowly. This drink does curdle easily. So, always chill your oat-dairy mixture and whisk in the lime juice at a slow pace.

Avena is a Latin American and Caribbean spiced hot oat and milk beverage. The oats are stewed and flavored before being blended into a thick drink. This beverage can be cooled and reheated as you need it. It doesn’t contain any citrus juice but can have some citrus peel with the autumn spices.

Is Jugo de Avena good for you?

I wouldn’t say it’s the healthiest juice, but I also wouldn’t say that it is unhealthy. Oats aren’t gluten-free, so for a celiac, it is not suitable. But, compared to sugar-packed fruit juices and coffee smoothies, it isn’t nearly as unhealthy.

What Is Licuado de Avena?

Licuado de Avena is also used to refer to this drink. Directly it translates to an oatmeal smoothie. This smoothie can contain citrus juice, but usually, it doesn’t. It’s another very broad definition but ultimately contains blended oats and dairy.

A good oatmeal smoothie recipe you can try is this Breakfast Banana Oatmeal Smoothie.

Where did Jugo de Avena originate?

No one can say for sure where this drink was first made. It is known that it comes from South America. Later, it became very popular in the Dominican Republic, which is where most people know it from today. 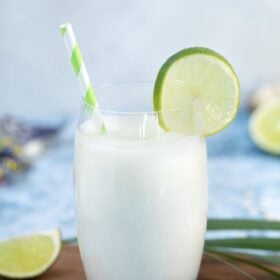