If you have never had brunch, or don’t even know what it is, I’m going to have to ask you – where have you been?! Brunch is the world’s favorite meal and current obsession.

It hits that sweet spot between breakfast and lunch when we can indulge ourselves with a long lie-in and a leisurely meal with all the food we wish we could eat during a weekday breakfast.

My favorite brunch is my recipe for baked French toast, and once you have seen my recipe, it will be your favorite too! And if you love baking, you have to try Jerè’s delicious Apricot Parmesan Puff Pastry Pinwheels!

My French toast recipe combines cinnamon-spiced custard with slices of baguette, caramel sauce (!) and, by baking it, not only are the insides super soft and squidgy, and the outsides crispy and caramelized, but you don’t have to stand over the stove for ages flipping endless slices of French toast!

Try my recipe for baked French toast this weekend and enjoy your well-deserved relaxing morning!

French toast is such a crowd-pleaser – there is something about a golden piece of sweet, creamy fried bread drizzled in maple syrup that the world can’t resist! Therefore, brunch isn’t complete without it. Flipping custard-soaked slices of bread in butter until crisp and golden, the maple syrup waiting on the table with the strawberries.

Baking it in a big dish, however, is one step better!

Put your slices of baguette in the dish, cover them in spiced custard and let them soak for at least 5 to 10 minutes until creamy soft. Cover with foil to prevent the bread from burning, then slide the dish into the oven to bake. Now, all you need to do is relax!

Plus, with my incredible caramel sauce, this becomes the best French toast recipe ever!

You read that right – caramel sauce!

By mixing together melted butter, brown sugar, and cinnamon, you end up with a lightly spiced caramel glaze.

Now, the surface of the French toast can caramelize with the spiced glaze, crisping and darkening in golden patches.

As soon as it’s ready, pull it out of the oven and serve, the French toast surface crunching under your spoon – yet soft like marshmallows in the center!

Who’s hungry now?! I certainly am!

Save time and bake your French toast in the oven

French toast in the oven is a morning life-saver. There are always one hundred things to think about – entertaining the kids, last-minute work deadlines, plans for the day – and that’s even before you’ve had a cup of coffee.

So, my recipe for baked French toast is here to give you a well-needed break. Simply whisk together the custard ingredients, slice the baguette, preheat the oven, soak the bread slices, then bake it. Now, you can sit back and drink your coffee in peace!

If you have a group to feed for a family breakfast or a brunch party, then baked French toast is perfect. Let the oven do the work as you mingle, serve drinks, or lay the table.

CAN I MAKE IT IN ADVANCE?

Yes definitely! Overnight baked French toast will make your morning even easier as you can keep the dish of baguette slices and custard soaking in the fridge overnight, covered with cling film. All you need to do the next morning is preheat the oven.

You can also make the caramel sauce in advance. Keep it covered in the fridge overnight. The butter will solidify so gently heat it in a pan or in the microwave.

WHAT SHOULD I SERVE IT WITH?

French toast and maple syrup are the perfect pair, and I would definitely recommend you serve maple syrup with my baked French toast as it soaks into the creamy baked bread, adding a touch of sweetness.

Here are some other suggestions of what to serve with your baked French toast:

If you are having a brunch party and need inspiration, check out my other brunch recipes including:

Enjoy a brunch feast this weekend and put your feet up thanks to my recipe for baked French toast with caramel sauce. 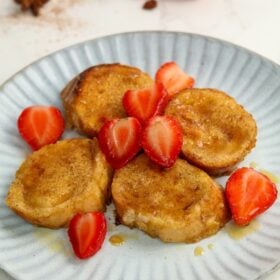 FOR THE FRENCH TOAST:

FOR THE CARAMEL SAUCE: