Today I will show you how I make my authentic sopa de fideo con papas recipe. It’s a Mexican potato and noodle soup with a rich yet simplistic tomato soup base.

This recipe is very easy to make, extremely quick, and surprisingly affordable. As long as you can find fideo (which can be challenging), it’s a budget-friendly meal that your entire family will enjoy!

This is one of Mexico’s most famous soups that is made with potatoes and a special kind of noodle called fideo. These ingredients, along with some wonderful aromatics, are cooked in a tomato-based sauce.

It’s an absolutely delicious, rich, flavorful, and texture-packed soup that will make you feel all warm inside.

You can serve this soup as-is. But, if you are feeling like making an entire meal out of it, serve it with my Homemade Garlic Bread. When pairing these two dishes together, I recommend going a little lighter on the garlic in the bread recipe.

There are a ton of variations of sopa de fideo. But today’s recipe is completely free of any meat and animal products. So, depending on how strict your diet is, you could even consider it to be vegan or vegetarian.

Some vegans don’t consider sugar suitable for their diet because some manufacturers process sugar with bonemeal (and more often than not, it’s not specified).

Nevertheless, let’s get to what exactly goes into a sopa de fideo con papas recipe and how to make it.

The hardest ingredient to find for this recipe is hands down the fideo. It is a unique Mexican noodle that closely resembles thin spaghetti or angel hair pasta.

Today, most fideo noodles are made from durum wheat. As I’ve mentioned, they are thin but also very short and slightly curved. Each piece measures about 1 to 2-inches (2.5-5 cm).

Now, you can definitely try finding fideo noodles at your local Italian grocer or even online. However, if you cannot find any, you can make your own.

You can make it from homemade pasta or simple broken regular spaghetti (to make smaller pieces). It would be even better if you could find thin spaghetti or use angel hair pasta.

Next up for my recipe, I decided to keep it simple. But, the flavors I do incorporate blend together seamlessly to create a rich savory soup.

I only use potatoes, tomato sauce, a couple of spices and aromatics, and vegetable broth. That’s it! All of these ingredients are very affordable and very easy to find.

This is another Mexican soup that is extremely similar to the one we are making today. You can even argue that the only difference between the two is the shape of the pasta used. This pasta soup uses pasta shells instead of fine noodles.

Are fideo and vermicelli the same thing?

These two products are extremely similar in appearance and the ingredients used to make them. However, fideo noodles are much shorter than Italian vermicelli noodles. And they are toasted before being incorporated into their dishes. It helps cook them while releasing their flavor.

How long can I keep sopa de fideo in the fridge?

It depends on what ingredients the fideo soup contains. Most of the recipes will last between 3-4 days. However, they are best the next day. If your soup contains highly perishable ingredients (like meat), I would definitely recommend eating it within a day or two only. 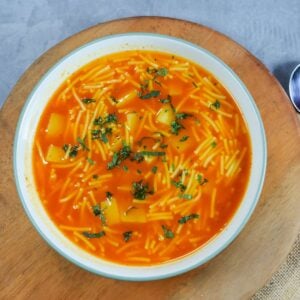