My Crema de Auyama recipe is incredibly easy to make. It’s stuffed with refreshing and hearty Dominican flavors created with only a few simplistic everyday ingredients. We will even be making our own sofrito recipe from scratch!

So, try this delicious soup today and pair it with an authentic Dominican beverage. I love Morir Soñando or Jugo de Avena the most. They are both easy to make and don’t take up a ton of time.

What Is Crema De Auyama?

Auyama is an easy-to-find Dominican pumpkin frequently used in the DR. While it technically isn’t the correct name for this vegetable, it has certainly become the go-to term. That’s why this soup is commonly known as Crema de Auyama. Another name for it is Sopa de Auyama.

So, what exactly is it? Well, if you haven’t already guessed it, it’s a delicious pumpkin soup. What makes it unique is that it contains loads more fresh flavors than your average Western pumpkin soup recipe.

For one, my recipe uses a fresh homemade sofrito sauce. It mainly consists of bell peppers, garlic, onion, and cilantro.

Then this soup is also made with coconut milk instead of heavy cream. I prefer coconut milk because it adds even more fresh flavors and delicious tropical undertones.

So, if you aren’t convinced yet, you’ll have to try it yourself. Let’s look at how to make Crema de Auyama from scratch!

My cream of pumpkin soup is completely vegan. Because I use coconut milk, vegetable broth, and olive oil, it is one of the ultimate animal-free soups out there.

That also means that these elements can be substituted with more frequently used alternatives. For example, you can use heavy cream, yogurt, or sour cream instead of coconut milk. And you can use chicken or beef broth instead of vegetable broth.

What are great substitutes for pumpkins?

You can use my recipe as a base to create a multitude of other squash-based soups. You can use butternut, sweet potatoes, hubbard squash, and acorn squash. Have a look at this list to get some more ideas.

How do you make Crema de Auyama Dominicana thicker?

Before blending the cooked pumpkin, remove some of the vegetable broth from the jug. This way, you can keep adding more broth after the soup has been made. That is a great way to have control over the consistency of the soup before, during, and after it has been blended.

If your soup is still too runny, you will need to create a roux or thickening paste with cornstarch. Mix a little bit of flour or cornstarch with pumpkin soup. Keep adding runny soup until you have a smooth runny paste. Add the paste to the rest of the soup and bring it to a simmer. That should do the trick.

What can you serve with Crema de Auyama?

Any type of bread is always a great (and safe) choice to serve with a soup. My Homemade Garlic Bread recipe is an excellent example of a tasty side for pumpkin cream soup. You can also serve this soup as a starter or appetizer to a meal or a side dish. 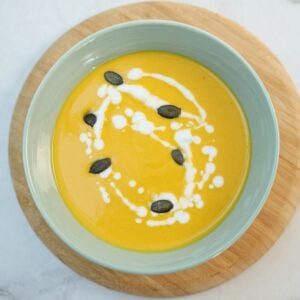 For The Pumpkin Soup