iCarly fat cakes are shockingly easy to make. I almost couldn’t believe it myself! You make these fluffy sweet treats with gooey cream-filled chocolate cupcakes. Then, you can finish them off with their signature look – a bright pink marshmallow and coconut coating.

And, if you are looking for some other fun desserts to make, go have a look at some of my other recipes. I especially love the Air Fryer Homer Simpson Donuts and the Chocolate Covered Strawberry Bouquet!

What Are These Mouth-Watering iCarly Fat Cakes?

iCarly fat cakes (also referred to as iToe fat cakes) are popular sweet treats that frequently made an appearance on the show. However, they only shot to fame when Sam became obsessed with them – and for a good reason!

These cloudy pink balls are made with delicious cream-filled chocolate cake. Then, they are covered with a gooey marshmallow coating and dusted with pink desiccated coconut.

The cakes themselves are simple in concept, but they take some time to make. However, I highly recommend still trying them. These fat cakes have an incredibly soft gooey texture and chocolatey sweet flavor. They will bring out your inner child!

As I have mentioned, you make these fat cakes with chocolate cake and a cream filling. They are then garnished with a marshmallow coating and colored desiccated coconut. None of these elements are hard to make individually. But they do take some time.

For the chocolate cupcakes, I chose a super easy and basic recipe. The cupcakes won’t come out too moist but also not dry. That is important because very moist cupcakes won’t allow the marshmallow coating to stick to their surface.

Then, we also have an easy cream filling. You make it using marshmallow fluff as the base. But that is only because I wanted to cut down on some unnecessary time. And this filling is a lot more shelf-stable than an actual dairy-based frosting.

Finally, we have the melted marshmallow coating. You have to add simple syrup to the recipe. Otherwise, the marshmallows won’t be workable.

Tips And Tricks For Sam’s Fat Cakes From iCarly

What Are iToe Fat Cakes?

“iToe fat cakes” simply refers to the 24th episode in which these fat cakes appeared. In this episode, Sam says that American fat cakes aren’t nearly as good as Canadian fat cakes because of the sugar they used.

Is iCarly Pink Cakes Based On Sno Balls?

I can confidently say that based on the physical appearance of the cake, the actual flavors, and the testimony of the cast, that iCarly fat cakes were inspired by Sno Balls. In fact, they used actual Sno Ball cakes on set.

Where Can You Buy Fat Cakes?

You can’t find the fat cakes from iCarly anywhere. But, you can buy Sno Ball at most supermarkets. They are widely available and affordable. That being said, I hate pre-packaged sweet treats. They don’t taste nearly as good and their texture is often a little stale. 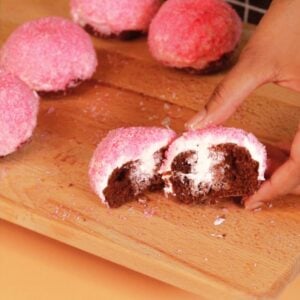 Keesha
These Fat Cakes from iCarly are super easy to make and well worth the effort. They are deliciously fluffy, creamy, and gooey – just like Sam likes them!
No ratings yet
Print Recipe Pin Recipe
Prep Time 15 mins
Cook Time 45 mins
Servings 12
Calories 253 kcal

For The Chocolate Cupcakes

For The Cream Filling

For The Marshmallow Coating And Garnish

To Make The Chocolate Cupcakes

Making The Coating And Garnish