Today I will show you how to make one of the most popular Dominican breakfast meals: Dominican fried salami with tostones. It is packed with flavor, deliciously crisp textures, and a refreshing tangy dipping sauce.

Give it a try and let me know what you think, or if you have any questions, in the comments below!

What Is Dominican Fried Salami?

Today’s recipe is quite simple and won’t take up too much time. This makes it perfect for busy weekdays.

Dominican fried salami is exactly what it sounds like. It’s Dominican salami that you fry in hot oil. But what exactly is this type of salami, and where do you get it?

First, what it is exactly? This is one of the most popular breakfast items that are usually served alongside eggs, fried plantains, and, like we’ll be serving it today, tostones.

It is made from a combination of beef and pork meat. There are many different recipes out there and each region, even family, makes it in its own way. However, it is worth saying that they generally contain quite a bit of pepper and a variety of spices.

This salami is technically pre-cooked. But it is rarely eaten raw. As I’ve said, fried salami is a staple breakfast item.

Where To Buy Dominican Salami?

While there are many homemade recipes out there, I personally don’t think many people have time to make them from scratch. At the very least, we won’t be covering that process today.

There are some tricks you can use to speed up the process, but that will cost you quality.

So I prefer just buying my Dominican salami online or from a local Latin American grocery store. Some butcheries do sell these as well. If you are looking for it, it’s usually labeled as “Salami Dominicano,” “Dominicano Salchichon,” or “Dominican frying salami.”

How To Make Fried Dominican Salami

So, first, you will need salami slices. You can also buy a whole salami and slice it yourself at home.

The slices should be pretty thick – not like what you traditionally know salami to be. Each slice can be roughly a quarter of an inch (a little over half a centimeter).

This will give it a delicious crisp texture on the outside while keeping the inside tender and juicy.

Once the slices have been prepared and patted dry, you can simply place them in a frying pan with preheated oil. They fry quite quickly, and you can get a big batch done in under 6 minutes (depending on the heat you use).

Once your salami pieces are beautifully crisp and browned, you can drain the excess oil on a paper towel. It’s as easy as that!

How To Make Tostones

Tostones are one of the most popular accompaniments to fried Dominican salami slices. Essentially, they are twice-fried green plantains.

You deep-fry plantain slices, flatten them using a tostonera, then cook them again. But don’t worry too much about the tools needed. I’ve got a great alternative in the recipe you can use!

You may have seen them in some of my other recipes, like these Fried Shrimp Tostones Recipe as well as the Tostones Rellenos De Camarones cups.

This element also doesn’t take very long to make and is surprisingly easy. Not to mention, the neutral flavor profile allows you room to play around with new and exciting flavor combinations!

You can coat them in a spicy rub or serve them alongside a delicious dipping sauce.

Whatever you end up choosing, your Dominican fried salami with tostones dish will still be amazing. It’s simple to make, doesn’t take ages, and can be customized to your liking.

Do you need oil to fry Dominican salami?

It’s the best way to get the outside crispy. Without it, the sides will caramelize, but it won’t have a crispy texture. The oil also helps prevent the slices from simply burning before they begin to crisp up.

Can you make Dominican fried salami in an air-fryer?

It is possible to make this recipe in an air fryer. But, you need to heat the appliance to roughly 400ºF (200ºC) and leave them in for 5 minutes. If they haven’t crisped up yet, leave them some more.

Can you make air-fried tostones?

You can easily make tostones in an air fryer. And it helps cut back on calories and fats! You will, however, still need to use a little bit of oil. It’s the only way to get that uber-crisp delicious texture. But that still means you will use less oil than when you fry the plantains in it. 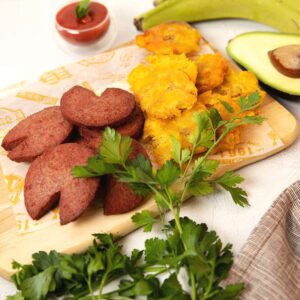 For the fried Dominican salami

For the dipping sauce

For the Dominican fried salami