This Arroz Con Dulce recipe, also known as a Dominican rice pudding, is filled with uber-creamy textures and wonderful festive wintery flavors. This pudding is super easy to make and extremely versatile.

If you enjoy desserts like this, you should definitely try my Dominican Bread Pudding Recipe and Buttery Spiced Snow White Apple Pie. Both will make great additions to your dessert table this festive season!

What’s The Difference Between Arroz Con Dulce And Rice Pudding?

When people refer to “rice pudding,” they are usually talking about American rice pudding. This dish is made with cooked rice that is baked inside an oven or cooked over the stovetop to get a creamy consistency.

Arroz Con Dulce is different in many ways. Arguably the key difference is that you make it with raw (uncooked) rice. The raw rice is cooked inside an uber-rich and creamy cinnamon and milk mixture.

Now, you will also see two dishes come up when you google Arroz Con Dulce. The other dish that goes by another name is Arroz Con Leche. What’s the difference?

Well, from what I can tell, there are none. It’s simply a different name to make it clear that this recipe is a sweet rice pudding, not a savory one. “Dulce” means “sweet” which is why the dish is named so.

Many people also argue that Arroz Con Leche is sweetened with Dulce de Leche only, which is caramelized milk. Arroz Con Dulce can be sweetened in many ways (usually granulated sugar or condensed milk).

While this completely makes sense, I haven’t been able to get a set-in-stone answer for this. It seems to all come down to people’s personal beliefs.

What Do You Need To Make Dominican Rice Pudding?

So, what exactly is Arroz Con Dulce made of?

The key ingredients that go into this warm and spicy pudding include uncooked white rice, autumn and winter spices (particularly cinnamon and nutmeg), evaporated milk, sugar, raisins, and butter.

There are many variations of this recipe. Some even use coconut milk or another type of plant-based milk. However, I love the way my family taught me to make it.

Another variation you can try is substituting the sugar with a low-calorie sugar substitute. You can take a look at this list for some ideas.

How To Make Arroz Con Dulce

Can You Make A Vegan Arroz Con Dulce Recipe?

Luckily, this is a recipe that can very easily be converted to a vegan one. The only ingredients you have to substitute are evaporated milk and butter, and depending on your beliefs, you may also need to substitute the sugar.

There are plenty of plant-based milk alternatives. For this recipe, I recommend trying some oat, coconut, or rice milk. If you like nutty flavors, you can obviously use almond or cashew milk.

Then, for the evaporated milk, you can also buy a vegan alternative. Today, there are plenty of options online and in-store. The same goes for butter. Margarine is an extremely common and often overlooked plant-based butter.

Tips And Tricks For Making This Sweet Rice Pudding Recipe

WHAT’S THE DIFFERENCE BETWEEN PUERTO RICAN AND DOMINICAN RICE PUDDING?

The two rice pudding dishes are basically the same. Both are sweet, creamy, and spiced rice puddings made from uncooked white rice, milk, and spices. Some people say that the Puerto Rican version always uses coconut milk, but I haven’t found any evidence to back that up.

This is not a healthy or low-calorie pudding. It is loaded with carbs, fat, and sugar. There are some ways that you can make it healthier (by using a sugar substitute and low-calorie dairy ingredients), but it will still pretty much be low in nutrients.

WHY IS MY RICE PUDDING MUSHY?

This is likely because you stirred the pudding way too much while it was cooking. The more you stir and agitate the rice, the more the granules break down. This releases more starch, which in turn makes the pudding mushy and sticky.

Arroz Con Dulce is a delicious, sweet treat for any occasion. Its creamy texture and cinnamon aroma will take you back to childhood memories with every spoonful. Plus, it’s easy to make and children-friendly! Try making this Dominican rice pudding at home for additions to your dessert table this festive season! 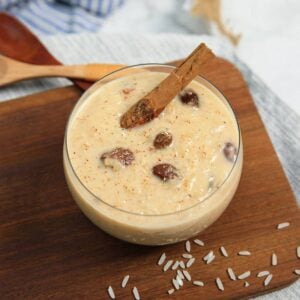