If you’re searching for an effortless yet delicious recipe to make for your next party, look no further than these Caprese Empanadas with Tomato and Mozzarella! The recipe for this dish is simple to follow, and its final product is guaranteed to please anyone’s taste buds. The best part?

We’ve all heard of Empanadas but what actually are they? A more versatile version of an American turnover, Empanadas are fried or baked pastries shaped like a crescent moon. The dough is made of flour or cornmeal and filled with either a savory or a sweet filling. Cheese is a favorite when it comes to filling these delicious golden pastries.

Where Are Empanadas From?

Even though Empanadas are mainly thought to be from Latin America, their actual roots are believed to be in Galacia, Spain. In a Catalonian cookbook from 1520, Empanadas are mentioned by name as pastries that were baked as round or rectangular pies and served as slices. As time passed, Spanish colonists brought the dish to Latin America and the Philippines where it became the dish we know and love today.

Where Are Empanadas Most Popular?

Latin America is a huge area with diverse cultural and culinary delights but one dish that stays consistent is Empanadas. Every country has its own version of Empanadas with fillings varying according to the flavors that are popular. For example in Mexico, you will find Empanadas that are filled with a sweet Pumpkin and cream filling while down south the filling is mostly savory.

While Latin America is known for Empanadas, these golden pastries are also hugely popular in the Philippines where they are traditionally filled with a savory beef and potato filling.

Where Do Empanadas Originate From?

As we’ve seen already, Empanadas were brought over to Latin America by Spanish settlers. The recipe for these filled pastries originated in Galicia in Spain and Portugal. Empanadas were first made by Moorish invaders and quickly gained popularity around the Northwestern Spanish region.

How To Store Empanadas?

To store them in the fridge, place them in an airtight container or resealable ziplock bag and store them for up to 3 days.

Alternatively, you can freeze your Empanadas for up to 3 months by wrapping them individually in plastic wrap or placing them in an airtight container or a resealable ziplock bag.

How To Reheat Empanadas

Whether you’re looking to reheat frozen or refrigerated Empanadas, there are several ways to do so.

You can place the Empanadas in the oven by placing them on a cookie sheet and baking them in a 300℉ oven until they are warm. You can also use the air fryer by cooking them for about 8-10 minutes at 275℉. If you’re in a hurry, you can deep-fry the frozen or refrigerated Empanadas until they are golden and crunchy.

Empanadas can also be reheated on the stovetop. Take a cast-iron skillet drizzled with a little olive oil and cook your Empanadas until they’re golden brown and warm. You can also microwave them in 30-second increments until they are warm.

While you can use store-bought pizza dough to make Empanadas, I prefer making my own pie crust. It’s easy and will be much more delicious.

Flour: No pastry dough would be complete without flour. Flour adds structure to your Empanada dough.

Butter: Butter adds flakiness to the Empanada dough. As the Empanadas bake, the butter melts and produces steam that is trapped in the dough. The steam creates pockets of air that create flaky layers once the dough is cooled.

Egg: Eggs help create a more tender crust and lighten up the texture of the dough.

Milk or Water: Milk strengthens the gluten bonds as well as helps the Empanadas brown and softens their crumb.

This Empanada filling is delicious and hearty. Here’s what you’ll need;

Tomatoes: Tomatoes add a slightly sweet yet acidic flavor to your Empanadas.

Salt and Black Pepper: Salt and pepper are necessary ingredients.

Basil: Fresh herbs are always a great addition to any dish. Basil, in particular, has a flavor similar to mint and anise that takes these Empanadas to the next level.

Mozzarella Cheese: No good Empanada is complete without a stunning cheese pull.

How Do You Make Caprese Empanadas?

First, start by preparing the filling by washing and cutting the cherry tomatoes in half. Then slice the mozzarella into thin slices.

Next, it’s time to prepare the dough. In a large bowl or food processor, whisk together the flour and salt. Add cold butter and the shortening to the flour mixture and mix until it resembles coarse crumbs. Add the egg yolk and water to this mixture, combine, and shape into a dough ball.

Divide the dough into small balls and roll them into small disks. Add the filling in the center of each disk, fold over and seal it with a fork. Leave the Empanadas in the fridge for 20 to 30 minutes while you preheat the oven to 375℉.

Bake for 20-25 minutes or until golden brown and you’re ready to enjoy this delicious treat.

Empanadas are not gluten-free. They’re made with flour which is a type of grain that contains gluten. If you are, however, in need of a gluten-free alternative, you can use a gluten-free flour blend to make the dough.

Can You Make Empanadas Ahead Of Time?

Yes! Empanadas can be made ahead of time and frozen. To freeze uncooked Empanadas, place them on a baking sheet lined with parchment paper, and freeze them for 30 minutes. Once frozen, you can transfer them to a freezer-safe bag or container and store them for up to 3 months.

What Are Empanadas Served With?

Empanadas are versatile pastries that can be served with a variety of dipping sauces and side dishes. You can serve ketchup, ranch dressing, hot sauce, or guacamole as sauces, or rice and beans as side dishes.

Can You Use Pie Crust For Empanadas?

Pie Crust is a lot flakier than traditional Empanada dough. While I prefer to make my own Empanada dough, you can use store-bought pie crust if you’re short on time. This crust may absorb more liquid than Empanada dough, but you will still have the flavor and flakiness you’re looking for.

Where Can I Buy Dough For Empanadas?

There are a lot of frozen food brands that make frozen Empanada dough. You can easily find them in big superstores or specialty stores as well. Just follow the instructions in the box and you’re on your way to deliciousness. 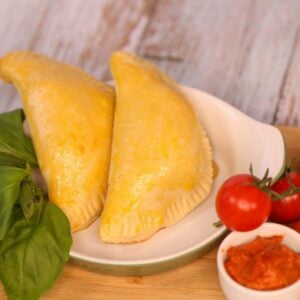