For today’s recipe, we will be making a traditional Dominican bread pudding from scratch. This recipe is incredibly easy, contains a few basic ingredients, and is loaded with delicious flavors.

You can also play around with the spices you add, the textures you create, and the number of raisins you want to incorporate.

If you love desserts, you also have to try my Deep-Fried Oreo Ice Cream recipe, or these delicious Homemade Chocolate Coconut Brownies.

WHAT IS PUDIN DE PAN?

But, what makes a Dominican bread pudding special is the ingredients, the way you can make it, and the way it is baked.

First, this bread pudding contains cinnamon and condensed milk. Then, you can blend it together to create a pudding-like texture.

And finally, this pudding is baked in a water bath inside your oven. Most other bread puddings are simply baked with dry heat.

This delicious dessert is very simple to make and only requires a few ingredients that you probably already have in your kitchen.

Bread: You can use any type of sturdy white bread. I used Baguette because I always have them at home.

Eggs: You need them to bind everything together

Milk: I used whole milk, but you can use any type of milk you have on hand.

Cinnamon: This is a must, in my opinion as it gives the pudding that cozy flavor we all love.

Condensed milk: This is what makes the pudding extra creamy, so don’t skip it.

Raisins: I love raisins in my bread pudding because they give a natural sweetness to the pudding but you could omit them if you’d like.

Cinnamon: This is a common spice used in many Dominican dishes. It gives this recipe a unique flavor.

Condensed milk: Is used for sweetness and to create a creamy consistency.

Sugar: This is used for the caramel that goes on top of the pudding.

Water: Is used to create the water bath that the pudding will be baked in.

How to Make Pudín de Pan

Make the caramel and pour it into an ungreased 9×13-inch baking dish and let it cool.

Cut the bread into small cubes and add them to a bowl.

Add the milk and let the bread soak up the milk for 20 minutes.

Then, transfer the soaked bread to a blender and add the eggs, cinnamon, condensed milk, and vanilla and blend everything until fully combined.

Pour the mixture into a caramelized baking dish and drop a few raisins in it if you like. Put the dish inside a bigger baking dish.

Pour hot water into the larger dish, being careful not to get any water inside the pudding mixture.

Bake for 45 minutes or until the top is golden brown.

Let the dish sit out of the oven until it reaches room temperature before serving.

There are two main variations for this recipe. The first has to do with the texture of the pudding and the second with the spices used.

My Dominican bread pudding recipe is made to have a flan-like texture. However, you can easily add some texture by not blending the soaked bread with the other ingredients (the custard).

The best method to use for a more textured bread pudding is to remove the chunks of soaked bread. Any leftover milk can be placed into the blender with the other ingredients.

Then, place the bread into the caramelized sugar-lined bundt pan. Cover it with your custard and top these with some raisins.

Now, when it comes to the spices used for bread pudding, I’ve only incorporated cinnamon, as most traditional Dominican bread puddings do.

However, you can create a Budin-like flavor profile. Budin is a Puerto Rican bread pudding that often contains a lot more spices. These can include cloves, anise seed, nutmeg, allspice, and fennel.

This part is up to your personal preference. Many people don’t like heavily spiced puddings, which is what makes this cinnamon bread pudding great.

Tips and Tricks for Making Bread Pudding from the Dominican Republic

WHAT BREAD SHOULD YOU USE FOR DOMINICAN BREAD PUDDING?

Any soft bread that can absorb a ton of flavor will work. The bread shouldn’t be very dense, like rye or pumpernickel bread. I like using baguette, sourdough, a farm loaf, or even ciabatta.

If you store it inside the fridge, the pudding will last up to a week. The longer it is left uneaten, the less tasty it will be. So, eat it as soon as you can. You can also freeze this pudding for up to 3 months. Leave it to thaw slowly inside the fridge before serving it. 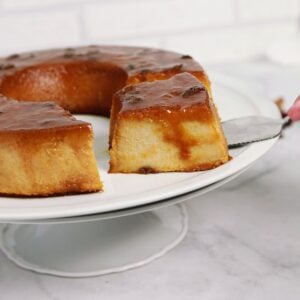