These Steven Universe potato bites are a fun new way of serving potatoes or even off-cuts! They are super easy to make, don’t take up a ton of time, and have an amazing texture and flavor! Fry Bits are soft and tender on the inside, but extremely crisp on the outside.

So, read on to learn how I make the ultimate Steven Universe Fry Bits recipe in less than an hour!

Where Do These Potato Bites Come From?

These salty treats are made from off-cut potato pieces from items that are actually on the menu. My. Fryman simply chops them up, fries them to become super crispy, and flavors them with some spices.

And that’s it! Who knew that fries are still being re-invented today?

How To Choose The Best Potatoes

When buying fresh potatoes from the store, the first thing to look out for is mold, sprouts, and rot. Any one of these three signs indicates that the potato isn’t good anymore.

Why Do Potatoes Go Green?

Potatoes will turn green when they are not correctly stored. These vegetables should be kept in a cool, dry, and most importantly, dark place. Otherwise, the chlorophyll levels in the plant will turn green.

The green color is also an indicator that there are high levels of toxins in the plants. So, if your potatoes are green, rather toss them to prevent any serious food poisoning.

When Do Potatoes Go Bad?

Potatoes can have a very long shelf life. But only if you store them properly. These root vegetables go bad when exposed to light, heat, and humidity (moisture).

If you keep them in a cool dark place, they can easily last a couple of weeks, maybe even months!

Naturally, you can change the shape of the Steven Universe Potato Bites as you’d like. In the series, they are all relatively small. But, if you want to make deep-fried potato rounds or fries, you can. My recipe will still give you incredibly crisp potatoes. The only thing that will change is the frying time.

Then, you can also use any type of spice you’d like to flavor your potato bites. I personally like to use salt, pepper, and garlic powder. These make super savory and flavor-packed bites.

As an alternative to deep-fried crispy potato bites, you can make this Fry Bits recipe in an oven. And better yet, make them in an air fryer to cut down on even more oil! You can use my informative article on using an air fryer as a guide.

Why Do You Put The Potatoes In Cold Water?

This is a technique many professionals use. It helps remove any excess starch that clings to the potatoes.

Starch doesn’t allow the potatoes to cook well, let alone get crispy! They also create a very sticky surface on the potatoes which makes them clump together.

If you used hot water (or even room temperature water), it would help “activate” the starch.

Can You Make Steven Universe Potato Bites In The Oven?

To make these Steven Universe Potato Bites in an oven, you can start by preheating the oven to 400ºF (200ºC). Then, line a roasting pan with non-stick baking paper. Prepare the potatoes as you usually would and season them well.

Are Steven Universe Fries And Bites The Same?

Fries and Bites are not the same things. Mr. Fryman makes them for free using off-cut pieces from other dishes. The bites (Fry Bits) are not officially sold at the restaurant.

Fries on the other hand is a typical dish on the menu of Beach Citywalk Fries. They have a completely different shape to the Fry Bits.

Do You Have To Boil Your Fry Bits Before Deep-Frying Them?

This technique is called “twice-cooking”. While it does give you incredibly soft and crispy potatoes, it is a lengthy process and not necessary for how I make my Steven Universe potato fry bites.

How Do You Serve Steven Universe Potato Bits?

You should serve these crispy bits in brown paper bags. There aren’t any sauces that go with it or additional garnishes. But, that doesn’t mean you cannot make them your own. If there is a sauce you like, add it if you want to! 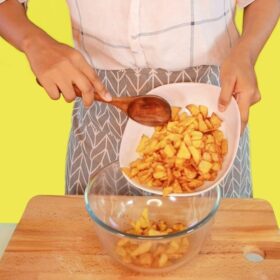