If I were to give a general rule of thumb, I would say that your average store-bought chicken wings will bake for roughly 25-30 minutes at 400 degrees uncovered.

Once you covered them with foil, they will take approximately 30-40 minutes.

If you bake larger chicken wings, the cooking time will also increase a ton. You can expect them to bake anywhere between 40-60 minutes.

How Long To Bake Chicken Wings At 400?

Now let’s look at the details to understand exactly how long to bake chicken wings at 400 degrees. And even more importantly, how to effectively bake wings under varying circumstances.

We will look at how the temperature affects the baking time, the cooking technique, as well as the size of the wings themselves. And, as always, I have included a delicious and easy 5-ingredient chicken wing recipe you can try.

The answers I could find for how long to bake chicken wings at 400 degrees vary drastically! Some articles say 20-25 minutes, some say 40-60 minutes. Now, this could mean the difference between having perfectly cooked, undercooked, or overcooked wings.

So, what is the ideal baking time for 400 degrees then?

I decided to do some experimenting myself. I found that the exact cooking method as well as the size of the wing majorly affects the cooking time. This is kind of common sense, but the degree to which the cooking times varies were shocking.

Furthermore, once you cover the wings with aluminum foil (to prevent them from getting too dark) the cooking time increases. It took between 5-10 minutes extra.

Then, I tested different-sized chicken wings. When using large roaster chickens (which generally weigh between 5-8 pounds each), the wings took considerably longer. These were baked at 400 degrees for about 40-50 minutes.

But, when I tried chicken wings from fryer chickens (which generally weigh between 2 1/2 and 4 1/2 pounds each), they took 25-30 minutes.

How To Test The Doneness Of Chicken Wings?

The safest way to test the doneness of chicken wings is to use an internal probe thermometer. This can accurately take the internal temperature of your chicken wing at its thickest part.

It should be 165ºF (75ºC). Always test the largest wing first at its thickest part. If that has reached the required temperature, the smaller and thinner pieces will obviously be cooked too.

If you don’t have a probe thermometer, you can also use this guide to check if your chicken is done or not.

Tips And Tricks For Making My 5-Ingredient Chicken Wings Recipe

FAQs On How Long To Bake Chicken Wings At 400 Degrees?

What is good with chicken wings?

Virtually everything goes well with chicken wings. Your marinade (sauce) will mostly affect good or great pairings. You can try my Air Fryer Mac And Cheese Balls or these Steven Universe Fry Bits Recipe. They are both delicious, crispy, and pair well with almost any flavor of wings.

How Long To Bake Chicken Wings At 350?

What are the two types of chicken wings?

You can either buy drums (drumettes) or flats (wingettes). Drums look like small chicken legs and have one bone running through the center. Flats, on the other hand, look like wings and have two or three connecting parts.

Flats are generally considered more flavorful and juicy. Whereas the drum cut has more meat on it. 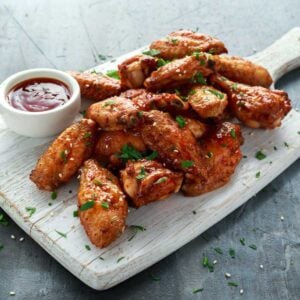