This Horchata de Arroz or Mexican Rice Drink recipe is incredibly easy to make and worth every second spent. It is loaded with rich and creamy textures and has a ton of delicious sweet, nutty, and slightly earthy flavors. It’s an uber-refreshing grain-based beverage that can also easily be made vegan!

If you love refreshing drinks like these, you have to try my Creamy Cuban Puffed Wheat Milkshake or this Chilled Agua De Fresa Con Leche.

What Is Mexican Horchata?

Horchata de Arroz is one of the most popular refreshing Mexican beverages that are very popular in the United States. All you need to make this fresh drink is a combination of rice, sugar, milk, water, cinnamon, and vanilla. Those are the base ingredients needed to make horchata.

However, as you likely know with popular recipes like this, there are thousands of variations!

One popular alternative (that is still considered to be a Mexican version) is made with coconut instead of rice. This obviously changes the flavor profile completely.

Neither is better than the other, it simply comes down to your personal preferences.

Mexican horchata is quite easy to make. However, it does take a long time. On the bright side, the time you spend waiting for the rice to soak is effortless. And it’s even better if you leave it soaking overnight!

There are many powdered products that make this drink. But none of them even come close to what horchata can really taste like. While this beverage does take time to make, it is worth every minute!

What You Need To Make Traditional Mexican Horchata

You make this refreshing Mexican rice drink with a couple of ingredients. My recipe uses even more to help develop a richer flavor and creamier texture.

The main ingredient for this creamy fresh beverage is rice. Any kind of white rice will do. Then you will also need cinnamon sticks and vanilla extract.

Next, you can use as much or as little sugar as you like. You can even replace the evaporated milk with condensed milk to add sweetness, texture, and creaminess.

You can use almonds if you’d like, but also replace them with other sweet nuts, like pine nuts, pistachios, or macadamia nuts.

And finally, unlike most recipes that just use water, I’ve also added some milk. You can use vegan milk if you’d like as well, especially almond milk!

How To Make Authentic Mexican Horchata From Scratch

You can combine the white rice with almonds and cinnamon sticks. Cover them with water so that the rice can get soft and infuse with flavor.

Once the rice has soaked, you need to blend it with the cinnamon sticks and water you soaked the rice.

Finally, the blended paste-like mixture has to be strained to extract the flavorful juices.

Once strained, you can refrigerate, mix together the remaining ingredients and adjust the flavors to your liking.

See?! It’s incredibly easy to make this refreshing and creamy cinnamon rice drink. And this recipe makes enough to serve between 4 to 8 people!

Tips And Tricks For This Mexican Horchata Recipe

What’s the difference between Spanish and Mexican horchata?

As you now know, you make Mexican horchata with rice while Spanish horchata uses tiger nuts. This obviously completely changes the flavor profile. Again, neither is better, and it depends on what you like more. You can even love both equally!

My recipe isn’t vegan. However, you can easily turn it vegan by using a vegan evaporated milk product and vegan milk. If you don’t use sugar as a vegan, you can use something like Stevia instead.

While this drink is loaded with vitamins and minerals (especially calcium, magnesium, and iron), I can’t pretend that it’s completely healthy. It does contain fat and sugar which makes this drink high in calories.

Now, that doesn’t mean it’s bad. It just means that this shouldn’t be a daily drink, and you should drink it in moderation. 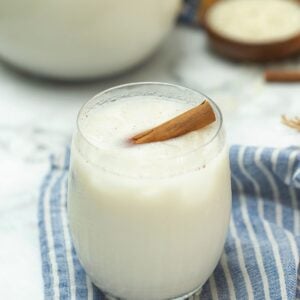 blend the rice and the mixture

Finish off the Mexican Horchata