Cinnamon rolls are one of the most classic sweet baked treats you can make during the autumn and winter months. They are deliciously sweet, creamy, and packed with flavor!

While these baked goods do take a while to make, they are well worth every second! My recipe will give you an in-depth guide for making these buns. It will help you get the best possible texture and flavor, just like authentic cinnamon rolls should have.

What Makes A High-Quality Cinnamon Roll?

Cinnamon rolls are relatively new creations in the world of pastry dishes. They originated in Sweden but quickly took the world by storm. Today, there are thousands of bakeries, restaurants, and stores worldwide that make these buns.

Traditionally, you make cinnamon rolls with a yeast-dough and sweet butter filling. Once the rolls are made, sliced, and baked, they get frosted with a cream cheese vanilla frosting.

The perfect cinnamon roll has a firm texture but is not squishy. It is moist without being soggy. These buns are fluffy and very soft with a spongy mouthfeel. They should have more of a bread-like rather than a cake-like texture.

Cinnamon buns also have a very rich flavor profile. It is a very sweet bun due to the filling and frosting. Obviously, depending on the spices and flavorings you use, the exact amount of sweetness will vary.

The color of your cinnamon buns has to be a beautiful golden brown. The frosting does hide the color for the most part, but the caramelized flavors will still be there.

Even though the recipe I am making today is classic, it doesn’t mean that there is no room for variations. My recipe will allow you to be as creative as you want.

You can play around with different flavors and textures using this single recipe.

I also like to use additional autumn flavors such as allspice, nutmeg, cloves, cardamom, and ginger. Remember to use ground spices and never whole ones.

Use toasted chopped almunds, walnuts, or pecan nuts for the best flavor.

Another fun way to make your cinnamon rolls different is by adding some melted chocolate to the filling. You can also make a chocolate cream cheese frosting instead.

Can you freeze cinnamon rolls?

You can freeze your cinnamon rolls for up to 6 months. If you can, freeze them before they get the cream cheese frosting. Otherwise, the cream cheese topping will melt away when the buns thaw.

How long can I keep them in the fridge?

If you made fresh cinnamon rolls, they can be kept inside the fridge for up to a week. You can also keep these rolls at room temperature for a day.

Are cinnamon rolls suitable for vegans?

Cinnamon rolls are not naturally vegan. They contain yeast, butter, milk, eggs, and cream cheese. You can, however, substitute them with vegan alternatives.

Can you make cinnamon rolls in the air fryer?

Yes, one thing I would be mindful of is that they could become a little bit too dry. If you still want to make them this way, preheat the air fryer to 350°F (170°C). Bake the cinnamon rolls for 8-10 minutes or until they are done. They will bake much quicker because the air fryer distributes the heat much better. 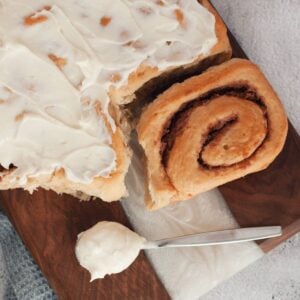 How To Make Cinnamon Rolls – An In-Depth Guide

Keesha
While the recipe is a classic one, it leaves room for a ton of experimentation! So, give it a try for a delicious sweet-baked dessert this winter!
5 from 3 votes
Print Recipe Pin Recipe
Prep Time 30 mins
Cook Time 25 mins
Total Time 55 mins
Course Dessert
Cuisine International
Servings 12
Calories 463 kcal

Finish off the cinnamon rolls