I love exploring the world, looking for interesting ingredients and fascinating flavor combinations, and I’ve ended up falling in love with tropical cuisine. One of my favorites is the cuisine from Senegal because of its incredible fusion of influences from Europe, combined with the native ingredients of the country.

This delicious fragrant mix of flaked fish with a rich tomato sauce, chewy rice, and large chunks of sweet vegetables is a stew perfect for winter. After tasting it, I knew I’d need it in my recipe file for the colder months, bringing warmth to the winter air, and so with a couple of tweaks, here is my recipe for thieboudienne rouge.

Senegalese cuisine is a fusion of different influences from countries such as France, Portugal, and North Africa. The Wolof people’s culture from northwest Senegal and the Islamic religion has impacted the country’s national dishes.

Fish is a crucial ingredient in most Senegalese cooking due to the country’s proximity to the Atlantic ocean. Many fish are used, including red carp, tuna, and monkfish, whereas meat doesn’t appear as significantly. Beef is eaten as well as goat and chicken. However, pork is not included because of the country’s large Muslim population. Crops include rice, sweet potatoes, couscous, and lentils, as well as a glut of vegetables.

Thieboudienne rouge has been labeled the national dish of Senegal, and for a good reason! It perfectly balances the ingredients and beautiful flavors of the country’s cuisine.

The name ‘thieboudienne’ comes from the Wolof language – ‘ceebu’ (rice) and ‘jën’ (fish). It can be translated as ‘the rice of fish’. The stew originated in the French colonial city of Saint-Louis in Senegal, the crossroad of different culinary cultures. It was created by the 19th-century cook Penda Mbaye. She was inspired to cook tomatoes with onions, creating a delicious red sauce, hence ‘rouge’. Since then Thieboudienne rouge has become a beloved dish of the country and is a sacred emblem of the culture and cuisine.

A dish of such high regard is not particularly quick to make as it has delicate seasoning detailed cooking instructions, and it requires patience! With this in mind, it is not a winter dinner to be rustled up on a whim. However, my recipe is easier for people who want to try something new in the kitchen. The rice, fish, and vegetables simmer away together for an hour to ensure all the flavors are beautifully balanced.

WHAT INGREDIENTS WILL I NEED FOR THIEBOUDIENNE ROUGE?

There are various elements to thieboudienne rouge, and these are some of the most essential:

WHERE CAN I BUY SOME OF THE INGREDIENTS?

There are a lot of African online supermarkets, so definitely take a look depending on where you live. Some significant supermarkets sell a vast range of international ingredients these days, and there are many local African grocery stores.

If you’re an adventurous cook like myself, then try thieboudienne rouge! This delicious stew is packed full of incredible savory flavor and is perfect for sharing with family and friends this season. 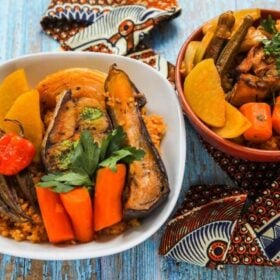 Keesha
The Thieboudienne rouge recipe is delicious and full of flavor! If you want to discover Senegalese cuisine, this is definitely a recipe you need to try out. This is one of my favorite recipes!
5 from 1 vote
Print Recipe Pin Recipe
Prep Time 30 mins
Cook Time 1 hr 5 mins
Total Time 1 hr 35 mins
Course Breakfast, Main Course
Cuisine African
Servings 4
Calories 587 kcal

FOR THE FISH STUFFING:

FOR THE FISH STUFFING