What if I told you, you could have two desserts in one? Imagine you could have the fudgy chocolatey chew of a chocolate brownie, and the sweet spice of pumpkin pie, but with the gooey texture of a blondie? No joke, you can have both of these incredible desserts in one with my pumpkin chocolate chip brownie recipe. And what better time of year to bake them than during this spooky build-up to Halloween?!

For me, Halloween and fall mean pumpkin, so it’s time to sneak pumpkin into every recipe I cook! And what better way to please the kids than to give them a pumpkin chocolate chip brownie, fresh from the oven, to get them in the mood for trick or treating?

Much like with my sweet potato brownies, these pumpkin chocolate chip brownies are only improved by adding a vegetable! Pumpkin and sweet potato share wonderful earthy sweetness which complements bitter dark chocolate and are perfect for a special twist of warming fall spices like cinnamon, ginger, and nutmeg.

I must admit though that these brownies may be my best brownie recipe yet! Here, you make two easy brownie batters – one chocolatey brown batter, the other creamy orange with pumpkin – and you swirl them together to create two desserts in one.

Ever wondered what a pumpkin brownie would be like? Now you can find out. The pumpkin brownie is soft and fudgy, but instead of being flavored with chocolate. The sweet pumpkin and brown sugar create a butterscotch-flavored blondie full of fall spice.

This pumpkin chocolate chip brownie recipe is so easy and fun to make! It is perfect for the kids to get involved who will have fun swirling the two colors together in the pan.

Mix together sugar, brown sugar, eggs, flour, baking powder, and salt, and divide the batter in two. To one, you add melted butter and chocolate chips. To the other, you mix in pumpkin puree, oil, cinnamon, and pumpkin spice.

It’s as easy as that!

For these easy pumpkin swirl chocolate brownies, you will need:

Unsalted butter: instead of beating together butter and sugar as you would for a cake, make your brownies with melted butter and they emerge from the oven dense and fudgy.

Flour: use a simple all-purpose flour rather than one with a higher gluten content which will make brownies with a cakier texture.

Baking powder: to give your brownies a nice rise.

Salt: Always add a teaspoon of salt to your cakes, cookies, and brownies as it enhances the flavors and complements the sweetness. Plus salted chocolate is a gift from heaven!

Sugar: This recipe uses two types of sugar-white and brown. White is ‘drier’ so when the sugar melts it creates a chewier texture…

Brown sugar: … and to make your brownies extra moist and fudgy, use brown sugar. It also brings a delicious depth of caramel which harmonizes with the pumpkin and spice beautifully.

Eggs: As this is a two-batter brownie recipe, it uses 4 eggs to bind together all the dry ingredients with the fat in the butter, oil, and chocolate.

Pumpkin puree: To make the pumpkin brownie layer, this recipe uses pumpkin puree. A can of pumpkin puree is much easier to bake with than an actual pumpkin! Instead of carving and chopping up a great big pumpkin (and cleaning your kitchen afterwards), grab a can of pumpkin puree as the flavor is concentrated and it is creamy and smooth, ready to use.

Oil: Choose a neutral-flavored oil, such as vegetable, so then it doesn’t dominate the pumpkin and spices.

Pumpkin pie spice: This deliciously fragrant mix of cinnamon, nutmeg, ginger, cloves, and allspice is a classic combination in fall baking and works beautifully with pumpkin.

Cinnamon: As well as pumpkin pie spice, add an extra teaspoon of cinnamon to draw out those fall flavors. 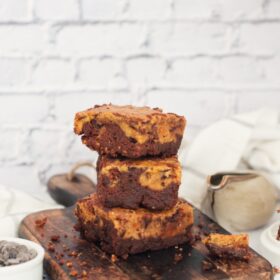