No one is really sure where Onion Cucumber Salad originally came from, but I am grateful it exists. The combination of refreshing cucumbers, crunchy red onions, and a tangy dressing is truly irresistible.

Are Cucumbers And Onions Good For You?

Yes, cucumbers and onions are great for you.

Cucumbers are low in calories. One cup of cucumber only has 16 calories, which is great if you’re looking to lose weight. Furthermore, cucumbers are full of antioxidants which can help prevent damage caused by free radicals.

Cucumbers are also 90 percent water which means they are super refreshing. They also contain high levels of Cucurbitacin, which can prevent cancer.

Onions, on the other hand, contain loads of antioxidants and compounds that combat inflammation and decrease cholesterol and triglycerides, lowering the risk of heart disease. Onions are also known to decrease the risk of developing colorectal and stomach cancer. They also help in managing blood sugar levels.

Overall, onions and cucumbers are good for you and add great flavor to many dishes.

Why Do People Pair Cucumbers And Vinegar?

Vinegar and cucumbers are a match made in heaven. The vinegar naturally boosts the flavor of the cucumbers while preserving their crunchy texture. This combination has been widely used in almost all cuisines around the world. The tang that comes from the vinegar pairs extremely well with the refreshing taste of cucumber.

Apart from the taste, the combination of cucumbers and vinegar also has a lot of health benefits. In Asian cuisine, this combination is eaten regularly as it is believed to boost the immune system and help detoxify the body as well.

Apart from this, this combination will help in weight loss and keep you topped up with Vitamin C, Manganese, and other nutrients.

How To Store Onion Cucumber Salad?

Store the Onion Cucumber Salad in an air-tight container in the fridge. It will last for 2-3 days.

Plus, the longer the salad sits, the more cucumbers and onions will release their juices. The juices will meld with the marinade, making the onion cucumber salad taste even better.

If you do not like an ingredient in the Onion Cucumber Salad, you can easily change it. Here are some options I’ve used in the past;

Onion Cucumber Salad consists of a few simple ingredients that come together to make magic.

Onions: For this recipe, I used red onions because they have a mild flavor and add depth to the salad. I soaked the onions in water and salt to reduce their sharpness. However, you can also substitute white onions for a more robust flavor or Vidalia onions for more sweetness. You can even use a combination of red and white, white and yellow, or all 3 types of onions for added flavor.

Sea Salt: It also helps to pull the moisture out of the onions. Sea salt rounds out the flavor of the onion cucumber salad dressing.

Water: The red onions are soaked in water to reduce their bite.

Cherry Tomatoes: Cherry tomatoes are used to garnish the onion cucumber salad and add a juicy burst of acidity.

Cucumber Seeds: Instead of throwing the cucumber seeds away, I used them to make the dressing. They add a creamy texture to the dressing.

Lime Juice: I used fresh lime juice, but you can also use bottled lime juice. The lime juice adds an acidic flavor to the dressing. It helps brighten things up and enhances the cucumber’s flavor even more. Alternatively, you can use any other type of citrus such as lemon, orange, or grapefruit juice. They will give the Onion Cucumber Salad a sweeter flavor.

How to make the perfect Onion Cucumber Salad?

This delicious and refreshing Onion Cucumber Salad will brighten up your summer months with its tangy dressing and crunchy texture. Get all your vegetables together and start chopping. Cut your cucumbers in bite size pieces and slice your onions thinly. Save the cucumber seeds.

Before making your dressing, soak the onion slices in water and salt. For the dressing get your cucumber seeds, coriander, vinegar, lime juice, and the seasonings in a blender and blend until smooth. Toss the cucumber and onions in a third of the dressing and serve on a bed of spinach with cherry tomatoes.

Save some dressing to pour on top and enjoy! If you have any leftovers, you can store the salad in an airtight container in a fridge and let the vegetables marinate in the dressing for a more intense taste. Serve with rice, grilled chicken, or any other main dish.

Is cucumber a vegetable or a fruit?

This is an age-old question that a lot of people have had on their minds. We’ve always looked at cucumbers as vegetables but the actual fact is that cucumbers are actually a fruit. They are classified as fruit because they contain seeds and grow from the flower of the cucumber plant. So hey, the next time you’re eating a cucumber, remember you’re eating a fruit.

Can you make a cucumber fruit smoothie?

Yes, you can. Cucumbers are 95% water and will add a healthy dose of vitamins and nutrients to your fruit smoothie. You can also make the cucumber the star of the smoothie with strawberries, bananas, and some spinach for an extra health kick.

Are onions vegetables or fruit?

Onions are classified as vegetables because the part that is eaten is the leaves and the bulb. Now, this is not something you were wrong about it.

What can I serve with Onion Cucumber Salad?

This refreshing salad pairs well with any main dish you have on the menu. You can serve this salad with grilled meats, kebabs, homemade pizza, chicken skewers, or even cauliflower rice. You can even have it on its own for lunch or a light snack.

Can I eat tomatoes and cucumber together?

Most dieticians will tell you that cucumbers and tomatoes are not a good combination together. This is because they are not digested at the same time and can counter the absorption of nutrients in your body. However, cherry tomatoes are safe to eat with cucumbers. That is why in this recipe I used cherry tomatoes.

Is it safe to eat cucumber skin?

It is not only perfectly safe to eat cucumber skin but also healthy. When you peel cucumber, you actually forgo a lot of the nutrients that are contained within the cucumber. If, however, your cucumbers are waxy, you may want to peel the cucumbers as they are artificially waxed. 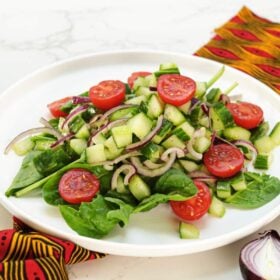 The Best Cucumber and Onion Salad

Keesha
When it comes to easy salads, look no further than this onion cucumber salad. It is a refreshing, tangy, and delicious salad that pairs perfectly with any dish. It is a classic salad that's best for summertime but can be enjoyed any time of the year as long as you've got cucumbers and onions on hand.
5 from 2 votes
Print Recipe Pin Recipe
Prep Time 10 mins
Total Time 10 mins
Course Salad
Cuisine American
Servings 8
Calories 59 kcal