If you’ve never had fajitas before, you’re in for a real treat. Fajitas are basically strips of meat that are cooked with peppers and onions on a skillet. They’re served with tortillas, salsa, and guacamole, and they’re absolutely delicious.

Fajitas de Res translates to beef fajitas, and they’re one of the most popular types of fajitas out there. You can use any kind of beef that you like for this recipe, but we recommend using flank steak or skirt steak. Just make sure to slice the meat against the grain so that it’s nice and tender.

You can easily customize your fajitas by adding different toppings, such as sour cream, cheese, guacamole, or salsa.

Beef: Skirt steak is the best option, but flank steak is also a good close second. Skirt steak has a beefy flavor that is further enhanced by the marinade.

Chili Powder: No fajitas are complete without chili powder. Chili powder adds a mild spicy flavor that won’t burn your mouth off.

Coriander: Coriander adds floral and mildly sweet notes to the fajitas. It pairs well with the cumin in this recipe.

Paprika: Paprika adds a smoky flavor to the fajitas.

Salt And Pepper: You can’t go wrong with salt and pepper. It brings everything together and makes it taste amazing.

Bell Peppers: The bell peppers add sweetness, but they also add some much-needed texture. In addition to this, depending on how many peppers you use, they can also help you stretch the skirt steak.

Onion: I like using red onions because they add a pop of color to the fajitas.

How to Make Fajitas de Res

Simply marinate the steak, let it rest, then cook the steak and vegetables on the grill. Take some flour or corn tortillas, top them with the steak fajitas, some sour cream, guacamole, and pico de gallo. Add some lime juice on top, and voilà! These are so good, no one will be able to resist. Enjoy!

What Cut Of Meat To Use For Fajitas De Res

This may be a little biased, but skirt steak is the steak for Fajitas de Res. Skirt steak packs a lot of flavors and has a tender bite.

Nevertheless, skirt steak is not always available at your local grocery store or meat market. If you cannot find skirt steak, you can substitute flank steak, sirloin, ribeye, and chuck steak.

As long as you marinate your steak properly, your fajitas will have a ton of flavor.

How To Cut Fajita Meat

Some people like to pre-slice fajita meat before they cook it. On the other hand, some people cook the meat first and then slice it into pieces.

I recommend searing the steak first before allowing it to rest for 5-10 minutes. Letting the steak rest will give the juices time to reabsorb back into the meat.

Next, cut your steak into thin slices against the grain. This will give you the most tender fajitas.

If you are using London broil, a tough cut of meat, make sure you slice it thinly against the grain. Slice the London Broil steak as thin as you can to prevent the fajitas from being too chewy.

How Long To Marinade Meat For Steak Fajitas

A good marinade will take your meal to the next level. Both skirt steak and flank steak soak up the flavor of the marinades really well. In fact, these cuts of beef only need 1-2 hours to marinate.

In contrast, if you are using tougher cuts of beef such as chuck steak or London broil, it is best to let the steak marinate overnight. This will allow the steak to absorb as much marinade as possible. The marinade will also have ample time to break down the tough muscle fibers. 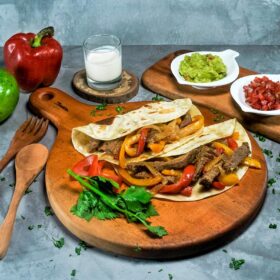