Banku with tilapia fish is an authentic and very popular dinner recipe from Ghana. Today, I will make a quick banku recipe with delicious stuffed tilapia fish and a homemade hot pepper sauce with fresh sliced vegetables.

My recipe takes less than an hour to make and is incredibly easy! And you can serve it alongside some other authentic Ghanaian dishes like this Classic Ghanaian Salad recipe.

What Is Banku And Tilapia Made Of?

Banku and tilapia fish is one of the best traditional dishes from Ghana. It can be found virtually everywhere, with each region having its own variations. However, the two main elements always remain the same.

This dish consists of banku (a type of corn and cassava flour dough) and cooked whole tilapia fish. The fish is then topped with either a type of stew or hot pepper sauce before being garnished with some fresh sliced vegetables.

Let’s first start with banku, as it is likely the more unfamiliar element between the two.

Banku is a type of dough made from slightly fermented cooked corn dough and cassava dough. Now, you may be thinking that the fermentation process equals a ton of time. And you’re not entirely wrong.

But we won’t be making banku from scratch today. Instead, I have developed a quick and easy recipe using pre-prepared ingredients you can find at most African grocery stores and markets. If you cannot find any fermented products, the regular ones will do just fine. They just won’t taste exactly the same.

Banku has a very fermented flavor profile. It is slightly sour and has tangy undertones. It is a very soft and elastic dough that you can break into pieces and eat by hand.

Next, we move on to the whole tilapia fish. You can prepare this fish in any way that you’d like. You can grill it, bake the entire fish, and even pan-fry it. The fish should always be completely cooked and simplistically flavored.

And finally, I will make a pepper sauce with this banku and tilapia recipe. I chose a classic Ghanaian pepper sauce recipe that is easy to make yet packed with flavor. And I’ll be topping the dish off with some freshly sliced red pepper, green pepper, and red onion.

Tips And Tricks To Make My Banku With Tilapia Fish

Are banku and fufu the same thing?

Both of these dishes are similar in texture. But, they couldn’t be more different. Banku is a fermented corn and cassava dough that is cooked after being mixed. Fufu is a boiled cassava dough that is never fermented. Both are considered to be a type of swallow. You can also try my Amala recipe if you like this category of food.

How do you know if the fish you buy is fresh?

There are many signs that the fish you want to buy isn’t fresh. The first rule to always follow is that when it smells like fish, the fish is bad. Then, you should also always check that the fish doesn’t have any bruises, discoloring, bloody eyes, and torn skin. Instead, fresh fish have clear whole eyes, fresh unblemished skin, no bloody parts or runny juices, and it is odorless.

Is banku with tilapia fish healthy?

Banku isn’t very low in calories. It contains about 100 calories per 1/4 cup. However, that doesn’t mean that its nutritional composition isn’t healthy. For example, if you need some carbs, banku is a great option as it contains 22 grams of carbs per 1/4 cup. 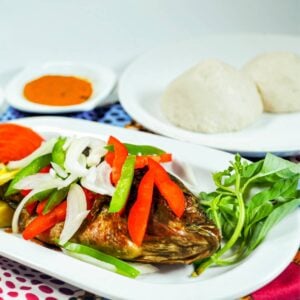 Keesha
Today, we'll be making a delicious banku with tilapia recipe. We'll serve some homemade hot pepper sauce with it and finish it off with fresh sliced vegetables and herbs.
5 from 1 vote
Print Recipe Pin Recipe
Servings 6
Calories 385 kcal

For the hot pepper sauce

For the hot pepper sauce

For the roasted whole tilapia

Assemble the banku with tilapia fish