Do you love jacket potatoes? If yes, then you’re going to love this recipe for Peruvian Stuffed Potatoes, also called Papas Rellenas.

This is a very popular dish in various countries around the world, and you can find them in all shapes, sizes, and flavors. The recipe for stuffed baked potatoes we will look at today is the traditional Peruvian Papas Rellenas recipe.

Do you know Papas Rellenas?

Papas Rellenas or Stuffed Baked Potatoes is one of the most famous dishes of Peruvian gastronomy. The potatoes can be stuffed with various ingredients such as chicken, ham, ground beef pork, cheese, shrimp, vegetables, boiled eggs, raisins, or olives.

This dish is usually served as a main course but can also be eaten as a side dish. It’s very popular in Peru and you can find it in most restaurants serving Peruvian food.

Ingredients for the Papas Rellenas

Potatoes: Of course, the star of this dish is the potato. You’ll need about one kg of potatoes for this recipe. Try to get large potatoes so they are easier to stuff.

Chicken: The chicken is cooked in a simple way with garlic, onion, and tomatoes and provides a lot of flavor.

Peruvian chili peppers or red chili peppers: To give an extra kick to the stuffed potatoes and make them a little spicy. If you don’t like it too hot, remove the seeds from the chili before adding it to your mixture.

Parmesan or Cheddar cheese: For this recipe, we’ve used Parmesan cheese but feel free to use your favorite cheese.

Olives: This is a very traditional ingredient but you can leave them out if you don’t like them!

Spices and aromatics: Garlic, parsley, onion, tomatoes, salt, and pepper to taste. All these ingredients give extra flavor to the dish.

Creole Sauce: This sauce is a very traditional Peruvian sauce. It’s made from red onions, cilantro, lemon, and olive oil and it will give your Stuffed Baked Potatoes an extra flavor!

How to make Baked Stuffed Potatoes

As a first step, we bake the potatoes. Wash and dry them well, then prick in a few places with a fork. Place on an oiled oven tray and bake at 230°C / 450°F for around 40 minutes until tender.

While the potatoes are baking, we can start preparing the stuffing. We heat some water to boiling point and add the chicken breasts. Let them cook for around 35 minutes before removing them from the heat.

When they are cooled, shred the chicken and set it aside. In a frying pan, we sauté some onion and garlic in oil for about two minutes before adding the chili pepper, finely chopped tomatoes, cumin powder, oregano, and salt to taste. Sauté for another few minutes until the vegetables are cooked. Finally, add the shredded chicken and olives, stir well to combine all the ingredients, then take it off the heat.

When both the potatoes and stuffing are ready, we can start assembling our Stuffed Potatoes. Cut each potato in half lengthwise and carefully scoop out most of the inside using a spoon, making sure to leave a layer about half a centimeter thick, so the potato skin doesn’t break. Add the mashed potato dough to the chicken stuffing and mix well.

Fill each potato half with the stuffing, generously sprinkle grated cheese over it and bake in a preheated oven at 250°C / 480°F for around ten minutes until golden brown and bubbling.

We can then remove them from the oven and serve Creole Sauce on the side. Enjoy!

Guacamole: Stuffed Potatoes with Guacamole is a delicious variation. Mix the mashed potato dough with guacamole, and there you have a delicious stuffing.

Shrimp: You can replace chicken with shrimp to make Stuffed Baked Shrimp Potatoes, or you can combine both ingredients for Stuffed Chicken and Shrimp Stuffed Baked Potatoes.

Cheese Stuffed baked potatoes: You can also add cheese to your Stuffed Potatoes for a cheesy twist on this classic. You can, for example, use feta cheese (and even olives!) for a Greek-inspired Stuffed Baked Potatoes recipe.

Sour Cream: Another popular variation is sour cream. You can either mix it into the mashed potatoes or use it as a dipping sauce.

Tuna: Ever tried Jacket potatoes with tuna? They go very well with tuna, so this variation is definitely worth trying out!

Beans: Stuffed baked potatoes with beans is another popular variation.

Ham: Finally, you could also go for a classic ham and cheese recipe by replacing the chicken with ham and adding grated cheese over the top. Delish!

How to use an Air Fryer for Papas Rellenas

You can also fry Stuffed Potatoes in an air fryer. You can basically follow the instructions above but instead of using the oven, simply place the Potatoes into the Air Fryer basket (make sure not to overcrowd it). Fry them at 380°F / 190°C and reduce the cooking time by half, or until golden brown and crispy.

Stuffed potatoes are a complete meal on their own, but you can also serve them with some delicious side dishes to make your meal even more complete. For example, you can serve them with a light salad or some grilled vegetables.

Can I make the Papas Rellenas ahead of time?

If you want to make the Stuffed Potatoes ahead of time, they can be stored in the fridge for up to 24 hours before baking. simply remove them from the fridge 20 minutes before baking and follow the same instructions.

Should I wrap the potatoes in foil before putting in the oven?

There is no need to wrap the potatoes in foil before putting them in the oven. The Potatoes will be perfectly crispy without it!

What type of Potatoes should I choose?

If you want to make Papas Rellenas, I would recommend using large potatoes (like Russet or Idaho).

Is it necessary to poke holes in the potatoes?

No, it is not necessary to poke holes in the potatoes before baking them. However, doing so will help the Potatoes cook evenly.

How can I store the Baked Potatoes?

If you have any Stuffed Stuffed Baked Potatoes left over, simply store them in an airtight container in the refrigerator for up to 3 days and reheat when ready to eat!

As you can see, Stuffed Potatoes are not only easy to make, but they also taste amazing! I hope that you like them just as much as we do, and I am excited for you to try this Papas Rellenas recipe with chicken at home!

Do you want more of these recipes? Then check out my Bolivian Stuffed Potatoes Recipe!

You’ve probably guessed by now that I love potatoes. There’s just so much that you can do with them! Here are a few more tasty ideas that you will love: 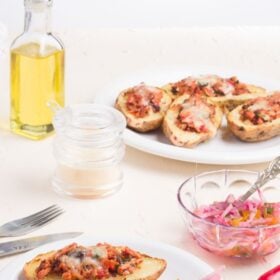 Keesha
Papas Rellenas are a very popular dish in Peru and are made with potatoes, cheese, chicken, and various other ingredients. They can be stored in the fridge for up to 24 hours before baking and make a great meal on their own or with some side dishes. Thanks for reading and I hope you enjoy this recipe!
5 from 1 vote
Print Recipe Pin Recipe
Prep Time 30 mins
Cook Time 1 hr
Total Time 1 hr 30 mins
Course Main Course
Servings 4
Calories 461 kcal

INGREDIENTS OF THE CREOLE SAUCE:

HOW TO BAKE THE POTATOES:

PREPARATION OF THE STUFFING:

HOW TO STUFF THE POTATOES WITH CHICKEN:

PREPARATION OF THE CREOLE SAUCE: