As it happened all across Latin America, Argentina’s cuisine is the result of the mixture of dishes, recipes and ingredients of the native people and those brought by the Europeans. You will therefore find various local delicacies with strong Italian, Spanish or British influence.

Below you will find 10 of Argentina’s most popular dishes. 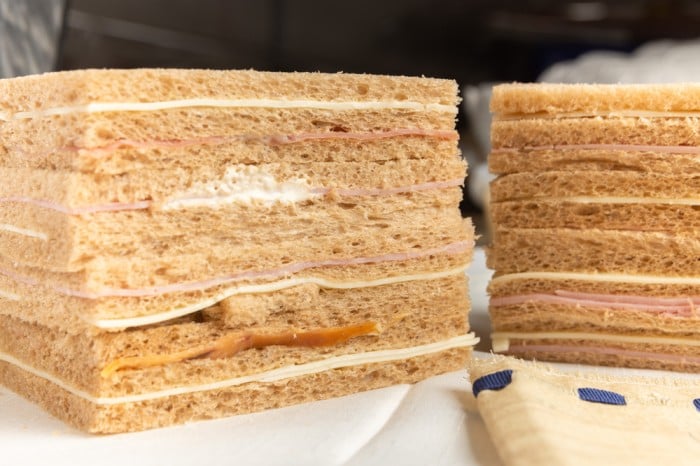 According to historians, Argentine crumb bread is a variation of the Italian tramezzino, which, in turn, emerged as an alternative to the English sandwich, but with an Italian flavor. It adopted the triangular shape that still characterizes it today.

It arrived in Argentina with the migrants from Italy in the second half of the 19th century. The Argentine crumb sandwich is a flat bread without crust. Usually, these sandwiches are spread with butter or mayonnaise and slices of ham or cheese. These sandwiches are usually quite thin and served hot.

The crumb sandwich, also called tostado or Carlito, is usually made for parties and gatherings because they can be prepared very quickly. There are endless variations depending on the region. Besides the classic version with ham, there are for example combinations with tuna, egg, tenderloin, or corn. 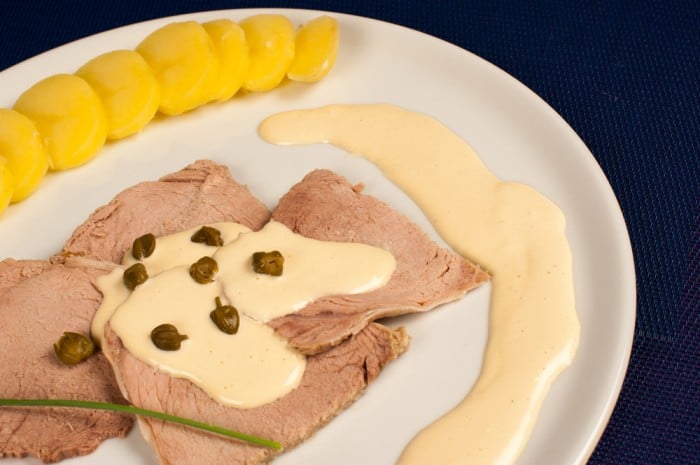 Vitel toné you will find on the table of the locals particularly during the Christmas holidays in Argentina. It is a dish that was created in Piedmont about 700 years ago. Piedmont is a region located in the north of Italy and its capital is the city of Turin.

Vitel toné (which in Italian would be vitello tonnato) can be translated as veal with tuna. Originally it was made without tuna, nor did it have mayonnaise, despite its name. In Italy it was not considered a dish to commemorate a holiday, it was simply consumed regularly regardless of the occasion.

With Ferragosto, an Italian holiday that takes place every August 15, Italians began to flock to the beaches and countryside to spend their holidays and to enjoy the arrival of the summer.

It is then when the Vitel toné with cold sauce and mayonnaise, as it is known today, began to become popular.

The Argentine secret for the preparation of this Christmas dish lies in the sauce. The fundamental base for its preparation is tuna, cream and hard-boiled egg. Some people add capers or anchovies, depending on the preference. 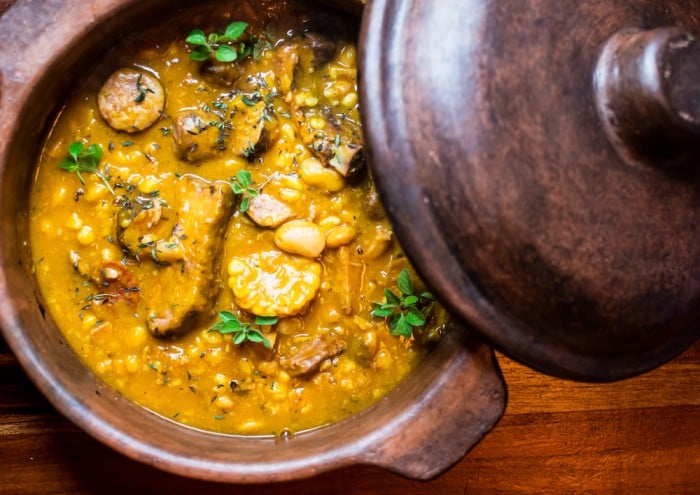 One of the most representative dishes of Argentina is the locro, a dish with strong roots to the Andean culture of the Quechua people.

Back then, as now, the main base for the preparation of locro was corn and beans. Thanks to its high caloric content, the locro is one of the favorite dishes during the winter, in addition to the affordability of its ingredients, its nutritional value is remarkable. It can be prepared a day before eating and, if it is well preserved, its flavor improves notably.

Despite its variations over the years, its vegetable base remains unchanged as does the cooking by simmering. 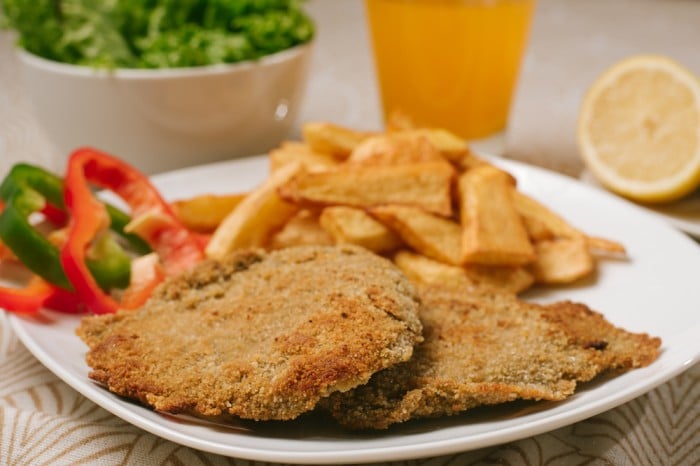 The milanesa consists of wrapping slices of beef, pork, veal or chicken in bread crumbs, egg, seasoned with parsley and garlic and other seasonings, then fried in a pan with oil.

The contribution of the European immigrants to this dish is undeniable. The name of this dish comes from Milan, cotoletta alla milanese which can be translated as veal Milanese, very similar to the Viennese breading. The rules for preparing it are unbreakable, one of them refers to the use of a bone cut from the top of the beef and butter, instead of oil, for frying.

However, there are variations that are just as appetizing, such as baking instead of frying. Many people eat them in a sandwich with french fries or mashed potatoes. The Neapolitan milanesa is also very popular. This version, which was born in Buenos Aires, has tomato sauce and mozzarella cheese among its ingredients. It is a spectacle to see the cheese melted and mixed with the tomato, after coming out of the oven. 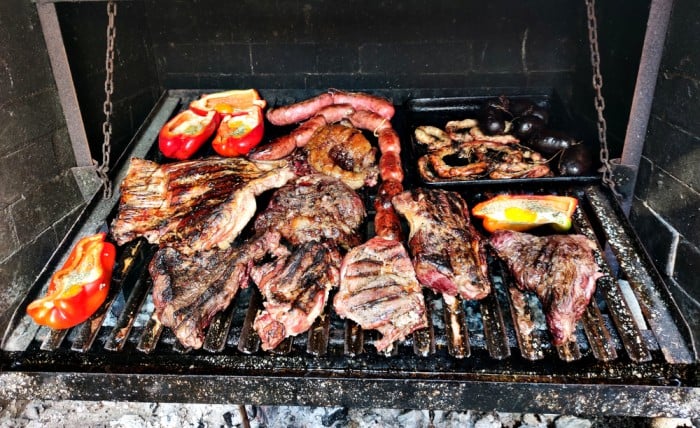 Asado is perhaps the dish that most represents Argentina. The secret of its preparation lies in roasting the meat cuts slowly, on the grill and on the embers. In this kind of ritual the type of wood is crucial, experts in the matter assure that the quebracho is the best for its consistency (it takes a long time to be consumed) and it is also aromatic.

To avoid burning the meat and, consequently, ruining its flavor, it should be left to roast only with the ember, it is the type of cooking that takes the time necessary for the meat to take aroma and flavor. The results are worth waiting for.

The Argentinians’ love for barbecue began with the gauchos and the cows that, in ancient times, roamed freely across the plains of the southern country where they were hunted and roasted by the so-called country man.

After hunting them, the gaucho made the cuts, dug a hole of about 20 centimeters in the ground, lit some firewood and placed the meat on top of it. Argentine asados are usually made with beef, but you can also use lamb and pork among others.

According to estimates, Argentina is among the largest meat consumers in the world. Studies indicate that, on average, an Argentinean eats at least 58 kilos of meat per year. 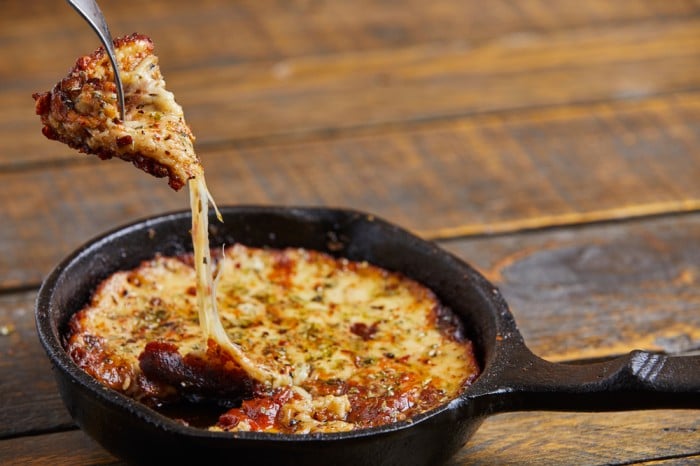 The provoleta is essential in every Argentinean barbecue. It has an amber color and is low in humidity. The flavor of this cheese, as well as its aroma, depend mainly on the curdling process. It is usually somewhat spicy, but pleasant.

According to Italian tradition, there are two varieties: Picante and Dolce. The latter is the one used in barbecues. It requires two or three months of aging. The Picante, on the other hand, needs a little more time, between 6 and 12 months, the result is much stronger.

The cheese should be crispy on the outside and soft on the inside. To achieve this combination, the provoleta should be cut in slices of approximately three centimeters. Before placing it on the grill it should not be too soft or too hard.

In Argentina it would be a big mistake to eat a provoleta cheese without a good piece of hot bread to go with it. 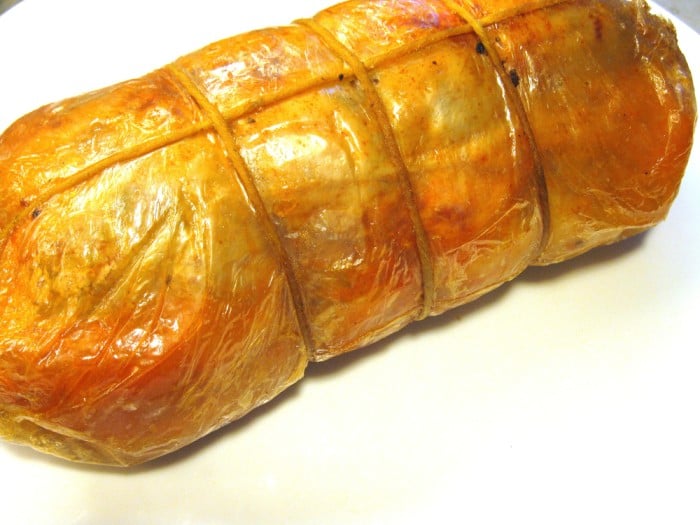 The matambre arrollado is a typical Argentine dish, which originated in the 1800s. It is a cut of beef cattle that served as payment to the slaughterers of the time, these were people skilled with the knife who were in charge of making the cuts of meat that would later be exported to Europe.

Once the work was done, the gauchos received as payment the “matambre”, made up of the leftovers and considered inferior. It is precisely that layer of meat stuck to the ribs that is cooked quickly on the spit and that “killed the hunger” of the workers, after a hard day’s work.

To prepare this dish, the meat must be cut into thin slices and then stuffed with hard-boiled eggs, olives, peppers and a mixture of vegetables. Afterwards, it is seasoned with olive oil, garlic, cilantro and is baked or grilled. 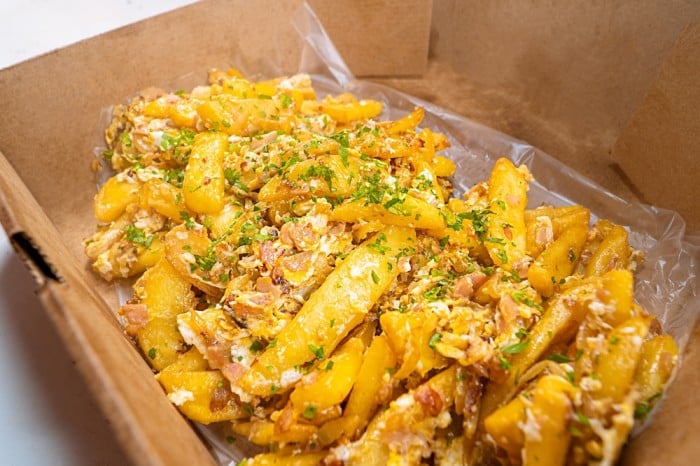 Uncertainty surrounds the origin of the Revuelto de Gramajo, a dish with different stories which are difficult to corroborate. One assures that it was invented by two porteños who frequented the bars of the area during the first years of the 20th century.

In the 1930s Arturo Gramajo, when he got home after a party and before going to bed, used to beat and fry eggs and potatoes.

The other one is the product of the historian Félix Luna. In his book: Soy Roca, he says that the dish was created by Colonel Artemio Gramajo, General Roca’s aide-de-camp in the 1800s. The certain truth is that the recipe became famous and nowadays is a typical dish all over Argentina.

To prepare this dish it is necessary that the frying pan has little oil, the ingredients must be stirred quickly so that the cooking is homogeneous. In some regions, according to the taste of the diners, bacon, peas, mushrooms, olives, bell pepper, seafood, palm heart and chicken are added.

However, expert historians and connoisseurs of Argentinean culinary art assure that the real Gramajo dish should only have salt and pepper as seasoning. Ingredients such as: peas, cane potatoes, or bell peppers are not found in the original recipe. 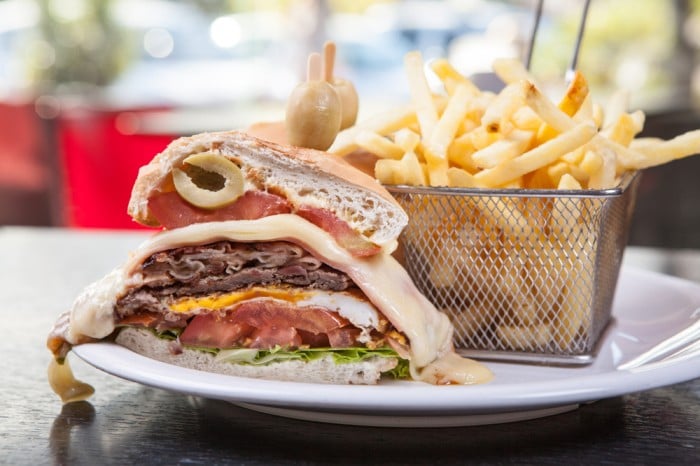 The chivito is a dish originally from Uruguay. It was invented in the mid-twentieth century in a famous restaurant located in the city of Punta del Este. It is a meat sandwich with several ingredients, seasoned with mayonnaise and accompanied with a portion of french fries and salad.

In Argentina, especially in the province of La Pampa, it is prepared with churrasco de lomo that must be browned on the grill with seasonings according to the preference of the diners; it also contains bacon, ham and eggs that must be fried. Besides these ingredients, you can also add mozzarella cheese, lettuce and tomato slices that serve as stuffing.

Everything is sandwiched on a hamburger bun and you can add mayonnaise and ketchup sauce. Some people add chopped olives and accompany the chivito pampeño with french fries. 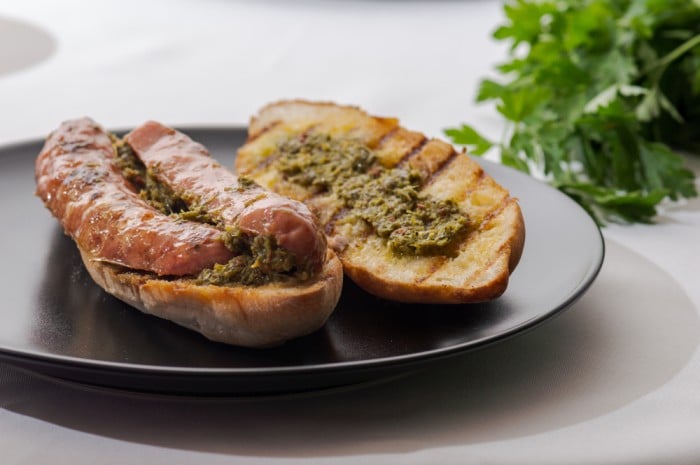 Choripán con Chimichurri is a hot dog with chimichurri sauce inside, a mid-19th century creation of the gauchos who inhabited the Rio de la Plata region, in rural areas. It is part of Argentina’s famous snacks, and a regular companion during football games.

For its preparation, a grilled chorizo sausage is required, which is then introduced in an open bread, French type. The chorizo is generally composed of 70% beef and the rest of pork. Its texture is soft and it is grilled fresh.

Chimichurri sauce, the great ally of the choripán, some connoisseurs say that it was invented in the 19th century by Jimmy Curry, an Irish immigrant. The sauce bears his name, but the spelling adopted the onomatopoeic form of pronunciation: Chimi Churri.

Argentina’s cuisine generally revolves around beef. Being one of the world’s largest exporters of this product, it is not surprising that it is an essential part of most of its dishes.

Of course, the contribution of countries such as Spain, Italy and England, among others, is undeniable, but the Argentine culinary ingenuity allowed the local cuisine to create recipes that have fascinated locals and visitors for centuries.