If you’re looking for a delicious and exotic dinner recipe, you should try out the beef prune tagine! This North African dish is sure to impress your friends and family. Tagine dishes are known for their complex flavors, and this recipe is no exception. The beef is simmered in a savory sauce: prunes, honey, and spices. So why not give it a try? Dinner will never taste so good!

Tagine is a North African dish that consists of meat, vegetables, or fruit cooked slowly in a pot with spices. Tagine dishes are named after the earthenware pots in which they are cooked. This Beef Prune Tagine recipe uses prunes and cinnamon to add flavor to the beef without overpowering it. You can substitute the beef with lamb or veal if you prefer.

Where does it come from

Tagine dishes have been around for centuries, and each country in North Africa has its own variation of the recipe. The dish comes from Morocco, where it is still a popular national dish. Beef is the most commonly used meat in tagine recipes, but lamb and veal are also typical. Beef is often paired with dried fruits such as apricots, prunes, or dates to add sweetness to the dish. In some countries, people enjoy tagine dishes on special occasions like weddings or religious holidays because of their labor-intensive preparation.

Beef: Use a beef roast, lamb shoulder, or veal shank

Salt, pepper, ginger, turmeric, and saffron: To taste. If you don’t have saffron, just omit it

Onions: Sautéed in vegetable oil until soft and translucent, about 15 minutes. You can also use shallots if you prefer a sweeter flavor.

Butter: melted, for prunes and syrup

Honey: Adds a nice sweetness to the dish. You could also use brown sugar if that’s what you have on hand.

Cinnamon: For flavor, can substitute with allspice if needed

Sesame seeds and almonds: Toasted. You can also use pistachios or pine nuts instead of sesame seeds if desired.

How to make Beef Prune Tagine

In a large pot or Dutch oven, sauté onions in oil over medium heat until they are soft and translucent, about 15 minutes. Increase the heat to medium, add the spices and garlic, and cook uncovered for a couple of minutes, stirring occasionally. Add beef and sear on all sides. Pour in water or stock, bring to almost a boil, reduce to medium-low, cover, and simmer gently for about two hours or until the meat is tender.

Halfway through, after about one hour, reserve one cup of cooking liquid from the pot and set it aside to prepare the prunes (replace with more water or stock if necessary.) Add the remaining ingredients except for butter and honey to taste.

Meanwhile, in a small pot, place the prunes into a large pot with enough water to cover them. Bring to a boil, then reduce heat so that the liquid is at simmering temperature and cook for about 20 minutes or until tender. Remove from heat, drain off the cooking liquid into another bowl (or discard it) and set aside the prunes in their separate bowl to prepare the syrup.

Back on the stove, add the butter and honey to the reserved cup of cooking liquid. Cook over low heat until melted, then pour it over the cooked prunes.

When the meat is cooked through and tender, carefully remove it from the pot with a fork or tongs and place it on a serving platter. Spoon the sauce and prunes over the top, and sprinkle with cilantro, almonds, and sesame seeds.

How to store Tagine

You can store it in the fridge for four days. Make sure to reheat the beef tagine until it is hot throughout.

You can also freeze the beef tagine for up to two months. Thaw in the refrigerator overnight before reheating.

Couscous: A traditional North African side dish made from semolina wheat.

Rice: A classic accompaniment to beef dishes around the world.

Quinoa: A high-protein, gluten-free grain that makes a healthy side dish.

Green Beans: A simple and delicious vegetable that pairs well with beef tagine.

Vegetables: Carrots, potatoes, and other root vegetables are perfect for slow-cooked dishes like beef tagine.

What is the meaning of the word Tagine?

The word Tagine refers to both the earthenware pot in which the dish is cooked and the stew itself. Tagine dishes are widespread throughout North Africa, with each country having its slight variation on the recipe.

How do you pronounce Tagine?

The word Tagine is pronounced tah-zheen, with the soft g sound coming from the back of your throat. This might be different than how you expected to pronounce it, but don’t worry! It’s an easy word once you get the hang of it.

Beef tagine has a complex flavor profile that is sweet and savory. The meat becomes tender and falls apart, while the prunes add a slight sweetness to the dish.

How many calories are in a beef tagine?

Tagine dishes are generally healthy as they contain a lot of vegetables. Beef is high in protein, and prunes are high in fiber. You can eat Tagine in moderation since it does include meat and dried fruits, which can be higher in calories than fresh options.

Using a normal Pot vs. a Tagine Pot

The Beef Tagine is a dish that has been cooked in the Moroccan Tagine for many years. You can use normal pots to make Beef Tagine, but the taste and texture will not be as good as if you were using a proper tagine pot.

What size Tagine should I buy?

This Beef Prune Tagine recipe is a Moroccan dish that will impress your guests! So why not give it a try? 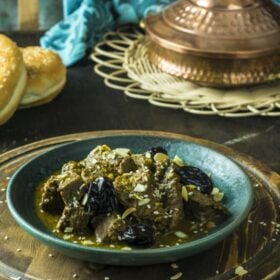 Keesha
The beef prune tagine is a delicious African recipe that is an excellent option for dinner! It is the perfect combination of sweet and savory. If you need some new dinner ideas, try out this delicious recipe!
No ratings yet
Print Recipe Pin Recipe
Prep Time 10 mins
Cook Time 20 mins
Total Time 30 mins
Course Main Course
Cuisine African
Servings 4
Calories 463 kcal